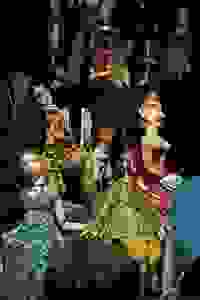 Theatre for the New City presents the Czechoslovak-American Marionette Theatre's interpretation of Czech, Slovak, and Italian fairy tales brought to life by dozens of puppets and a mounted deer's head.

The evening is named for its first story, a Czech tale in which a charcoal burner's son, predestined by his fairy godmother to marry a princess, is sent by the evil King on a quest to find the sun's three golden hairs. Resolving three more difficult tasks along the way, he returns with rich rewards, angering the envious King who gets his comeuppance.

The second tale, 'Salt over Gold,' is a Slovak story with echoes of 'King Lear.' A princess who values her father "only as much as salt" is banished, but returns to save her dad when salt disappears, throwing the kingdom into disarray.

The third tale is a version of the same story, known to Italian readers as 'Dear as Salt,' from Italo Calvino's famous 1956 collection, 'Italian Fables.'

See it if You have unwavering interest in children's theater, no matter what.

Don't see it if Are hoping your kids will be charmed/delighted by marionette theater. This one's incomprehensible, seems unrehearsed, and poorly executed. Read more

Don't see it if you have no interest in puppet theater , folk tales or childrens theatre- caliber players Read more

See it if You are into Czech puppetry (which involves rather non-family-friendly puppets and story elements, but is overdone as if for young children)

Don't see it if You don't want to listen to grating falsetto voices, are creeped out by puppets, want a traditional show, don't care for political jokes.

See it if you have a love for puppets- some 200 years old, if you're drinking after or just finished. Can be in the moment & laugh at the banal.

Don't see it if you expect theater. Even as a 'fairy tale" it lacked a lot. Not for kids as it's too late in the evening & puppets are scary. Read more

See it if you'll like looking at antique puppets and hearing a story with adult (mostly political) humor told the way one would a child.

Don't see it if you can't let yourself run with absurd childlike stories with no depth (this was lacking even fairy tale depth).

See it if you are not sober or really like laughing at the most absurd.

Don't see it if you are expecting a cohesive, charming, kid-friendly show.

See it if You enjoy classic Czech marionettes with a modernized fairy tale.

Don't see it if You don't enjoy quirky puppetry.

Don't see it if you want an intelligent story.