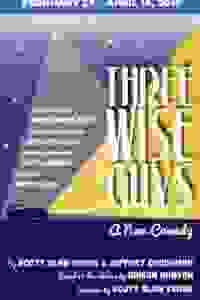 As the bootleg liquor flows, the guys agree to band together and take to the road to avoid all the hubbub of the holiday. Besides, notorious racketeer Heine Schmitz is after them, and they have to get out of town. Over one long life-changing night, they make some big decisions while inadvertently spreading good cheer around and about to one and all.

Don't see it if ... you have many better shows to see.

"This production mostly demonstrates how difficult it is to bring Runyon to life...Runyon was not so much about plot as he was about character and color...Lacks the relish Runyon brought to his larger-than-life creations...The pace lags and the actors never find that sweet spot between arch formalism and comic abandon. Hawkins needs more of the carefree swagger of a lovable rogue like Dancing Dan...Missing are tone, pace and flavor — that elusive snap, crackle and pop."
Read more

"The play is as much an elegy for a bygone era as it is for an off-Broadway company on its way out, fully exemplifying the organization's modest successes even if it doesn't always work...Evans, who directs, and Couchman take certain liberties, particularly in the play's entirely invented middle section...This is where the work really falters, mostly because it has a tendency to lose the distinctive Runyonese that the rest of the work so pleasingly encapsulate...Not perfect but still enjoyable."
Read more

"'Three Wise Guys' has the look and feel of a synthetic: It apes the manner of a classic screwball farce without delivering the laughs...The story is also poorly constructed, requiring the action to stop repeatedly for flashbacks -- making use of projections and shadow puppets -- to fill us in on various complicated backstories. This is nothing against the cast, all of whom, under Evans' direction, deliver neatly stylized characterizations without going over the top."
Read more

"Clocking in at a breezy 85 minutes, 'Three Wise Guys' doesn't come close to overstaying its welcome. But there is a sense that Evans and Couchman want to send us to the exits before we've had time to think about the plot holes they couldn't quite fill after mashing together the two Runyon stories. My advice? Just sit back and enjoy the con."
Read more

"There are numerous comic portrayals and one liners that tickle the funny bone...Surprises all around, lots of wacky conversations as the characters keep popping in and out...And there’s an adorable bed scene – the least expected! It’s amazing how much can happen in one evening! It’s all tongue in cheek, and even mobsters have a heart, especially on Christmas Eve."
Read more

"A pleasant and funny tribute to the era of speakeasies, bootleggers, guys and dolls...Nothing about any of this is particularly new or surprising, but arguably that predictability is one of the production's greatest strengths...Playwrights Scott Alan Evans (who also directs) & Jeffrey Couchman understand their source material and its roots...A graceful, funny, and warm production."
Read more

"It is a charming farewell...The actors handle the dialect well, with only the the occasional lapse in accent...'Three Wise Guys' is a little gem of a play. So much of Damon Runyon’s storytelling takes place in dialogue, he’s a natural for the stage...Director Scott Alan Evans keeps the action moving without sacrificing the quieter moments that give the humor its zest. It is difficult to pull off, but the cast make it look easy."
Read more

"This snicker-worthy and sweetish play doesn’t feel very vital nor is it a high level, high-octane comedy, but it is done with love and a good spirited need to entertain by all involved...It’s pleasant and mildly entertaining fun as directed by Scott Alan Evans...Overall the piece flies by on a bit shaky but silly charisma, piling on the giddy jokes one on top of each other with sentimental affection."
Read more