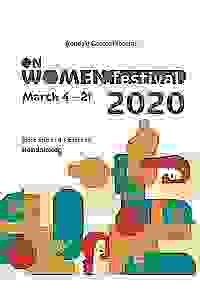 To Moscow! A Palimpsest

In this contemporary retelling of Chekhov's "Three Sisters," four actresses and two musicians set out to compose their version of the drama. Note: this show will be performed in Portuguese with English Supertitles. More…

Written among the vestiges of the original play, it explores the theme of the difficulty of resisting the erosion of life and dreams by the action of time. Revisiting the drama of the three Chekhovian sisters who dream of returning to Moscow, the lost paradise, without ever succeeding, we are faced with questions that resonate perfectly with today’s world.

See it if you’d like an engaging, almost contemplative (& simplified) update of a Chekhov classic, with lots of style & tasty music.

Also I’m glad I know “Three Sisters” well. That freed me a lot of the time from reading the English surtitles to “To Moscow! A Palimpsest,” a smart, touching update of the classic play by a Brazilian troupe of 4 women actors, 2 male musicians (who also have smaller acting parts) & a visible stagehand. The update follows the original central story, though not religiously, & subplots are removed. Because of the frequent song, the habit of the actors to deliver lines to the audience—& often break character to talk to us directly—& their invitations to join in on the youngest sister’s recurring birthday parties by sharing champagne, cake & vodka with us, the whole affair is fully engaging. The acting is deeply affecting: We feel the plight of the 3 sisters, trapped in lives not fully their own making. But a final singing of a Psalm-derived song in ravishing 3-part harmony is able to summon up some sisterly comfort for these 3 women anyway, fully earned because we’ve felt the cost.... Read more Read less

See it if You want to see a beautifully acted play in Portuguese.

Don't see it if As this play is a bit dated. The staging was problematic at times When the actors blocked the Subtitles large screen.

See it if Portugués is so neurotic hear and it conveys so much in its sound which added flavor to the subtitles. The actors are beautifully expressive

Don't see it if If you have a difficult time Reading and watching action on stage you may not feel comfortable. Food and drink is shared

Also For a company from Brazil to come
Here and share such beautiful and complex work with us, and they made it so personal by sharing drink and food with us all, is a special gift. I am so happy for them and us to have this experience.
... Read more Read less

See it if You like inventive takes on classic theater (in this case, The Three Sisters) and appreciate creativity.

Don't see it if You like big productions or straight-forward presentations of classic plays.

Also Four excellent women actors give a new take on this Chekov play that has humor and breaks the fourth wall without losing seriousness. Thought-provoking. Musicians enhance the show.... Read more Read less

“To Moscow! A Palimpsest” hasn't been reviewed by any Critics (yet!)