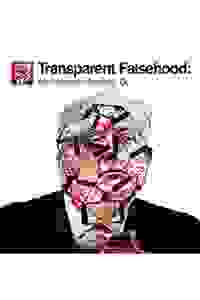 Imagine flipping wildly through the channels of Trump's life as if it were a crazy reality show. One minute he's putting Barron to bed, reading him from his favorite book 'The Art of the Deal.' Next, we get a behind the scenes look as Trump makes love to Melania while getting ready to perform his HBO special, 'Without Precedent.' Flip again and you have an impromptu meeting with Steve Bannon in the men's room; or a seder with Ivanka and Jared at Mar-a-Lago; not to mention a touching reunion with his dead dad in full KKK regalia. The invented scenarios are simultaneously sad, comic, and absurd, but most of all, surprisingly relatable. By filtering out the political noise and static, 'Transparent Falsehood' aims to distill Trump to some distinct essence, something that can be better understood if not contained.

See it if If you have not had enough attacks on the president and enjoy horrible, not even funny humor.

Don't see it if If you like anything that resembles theater. Ensemble was not bad, story, humor was terrible.

See it if you would like to see a sometimes sharp take on Donald Trump that tries to explain him by probing his relationships with family members.

Don't see it if you are too tired of Donald Trump to endure sitting through a play about him. Read more

See it if you have nothing better to do, and want to see every anti-trump play that exists. Only thing funny in this show is the chandelier.

Don't see it if you value your time. I feel bad for the actors, since the script is not funny.

See it if The show needs to be slicker in its story with Trump being such an easy target. The jokes & clever observations are neither funny nor clever

Don't see it if The cast is trying to elevate the mediocre material but it seems like an uphill battle with no successful outcome.

See it if If you like or hate everything (Donald DRUMPF-REAL LAST NAME). THE BEST PART THAT MADE YOU GASP & THINK WAS THE VERY END!! OMG!!

See it if you don't have a life

Don't see it if you still love trump and do not want to see him being ridiculed. Also, actors are good, but don't expect to see lookalikes or impersonation Read more

"Playwright Gil Kofman offers a series of muddled extended sketch comedy scenes mixed with an attempt at psychological insights that cumulatively falls flat. Mr. Kofman has a command of the facts and has a sense of structure but his execution is virtually unfunny, often breathtakingly so...The one bright spot is the 15-minute segment 'Without Precedent.' It’s the highlight of Ezra Barnes’ terrific performance as Trump...As skilled as Barnes is, he isn’t able redeem the other 80 minutes."
Read more

“Parts of the show hit a nerve, parts are laugh-out-loud funny. But too much of it lapses into tedium, notwithstanding powerful seriocomic performances and sharp technical production...All the onstage talent in the West Wing can’t make saggy material taut. The scenes suffer from the same problem that have afflicted so much of the sketch comedy of SNL...not knowing how to focus or when to stop...A smart idea sharply staged and well played...But more often than not it misses the clarity it seeks.”
Read more

"The superficial comedy well is deep. However, the deeper comedy of successful satire that allows for the exposing of new and insightful truths is nowhere to be found...The ensemble does a fantastic job with the material, but the material itself needs work...If it’s intended to be lighthearted fare that simply ridicules those in power by exaggerating their flaws and bad policies, it needs to lean farther in that direction and develop clarity around who is being ridiculed in the first place."
Read more

View in admin
B
Matthew Rettenmund

“Kofman's apocalyptic biography of Drumpf...Barnes is nothing like Drumpf, yet over time, his line readings feel more and more familiar, until his impersonation feels effortlessly right...Not for everyone — it's not even for all Drumpf-hating New Yorkers...But it's a feat to produce such an aggressively twisted, avant-garde play...While it can be hard to decide whether the play is droning on or it's just about a man who drones on, it's rewarding if you're up for a black, black dose of reality.”
Read more