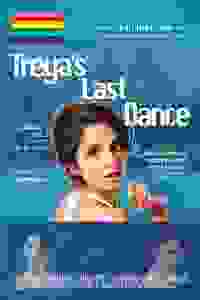 Part of FringeNYC: Faced with Croydon's mankiest speed-dates, Treya blunders into some messy truths - her brother's death; two lovably eccentric parents; the fallout from a British/Indian culture clash. A hilarious, awkward, heart-wrenching tale of love and loss in London.

FROM THE ARTIST:
Treya's Last Dance, a solo show, is a tightly-written, one-act dark comedy.

Awkward, brittle, lovable Treya - a young British Asian - is gently forced to go speed-dating. Her worried yet loving parents are keen for her to find her 'life-partner.'

So far, so conventional.

But all is not as it seems on the surface.

In a dingy Croydon venue, across the table from a series of dodgy speed-'dates,' talking a mile a minute, Treya stumbles upon a way to start facing up to a recent and terrible tragedy.

Touching on a multitude of themes within the umbrella of being a second generation immigrant, Treya's Last Dance is, at heart, a story about the universal themes of identity, sexuality and the messiness of grief.

The show premiered at the Hollywood Fringe Festival 2015, where it won a Combined Art-form Pick of The Fringe Award. It moved to London for a short tour earlier this year, garnering more outstanding reviews. These five FringeNYC performances will be the absolute last chance to see this brilliantly funny, mouthy, topical show.

See it if You want to see a crisp, lively show with a performer who is meticulously at the top of her game.

Don't see it if You need the presence of other actors sharing the stage.

See it if you like your theater to be funny and thought-provoking, layered and nuanced, and very well-acted.

Don't see it if you want to watch something that's only about the pitfalls of dating.

Don't see it if you have no heart.

See it if You are young, single and lovelorn & feel the world is a f***ed up place and the roundness of your pegs will never fit into its square holes

Don't see it if You are old and hard of hearing... The actress is dynamic, but speaks at lightning speed and her heavy accent can be challenging at times.

See it if Engrossing and emotional.

Don't see it if Sit up close as it was not easy to see in the back.

See it if You enjoy dynamic storytelling filled with diverse character work that is both comical and poignant. I laughed AND cried. The ultimate!

Don't see it if Do not want to be moved to tears.

See it if you are interested in a story from an immigrant's perspective, particularly Indian immigrants in London. Tightly scripted and very funny.

Don't see it if you are xenophobic or homophobic.

“Bhatt excels in creating a world of diverse people even though there is just one person on stage. Although It is a pleasure to watch the journey of her characters as she moves from the comic to the profound, there are shifts which happen too quickly and the foreshadowing borders on excessive. Perhaps this is because fifty minutes is an insufficient amount of time for a production with ambitious themes like culture shock and young death...A longer run time would ultimately benefit the piece."
Read more

“Bhatt is an electric performer, showing her intelligence in every emotional gear shift and in her ability to play superb comedy, as well as complex grief. She is an accomplished physical performer, able to inhabit the many characters she plays with believability and well-observed characterization...Director Tiffany Nicole Greene has ensured there are not only moments of frenetic hilarity, but also ones of stillness and shattering honesty...This production is essential festival fare.”
Read more

"In the form of dramatic monologue with its wandering reminiscences, careful pacing of revelations and bittersweet realism, it somewhat strangely echoes Bennett’s 'Talking Heads'...At times it feels as though there is too much peripheral baggage, yet the central flow of both Bhatt’s writing and performance is superb. Notably, she is deft at managing cultural stereotypes in a way that avoids both racial profiling and preening political correctness – a rare skill indeed."
Read more

"Bhatt’s writing is consistently sharp...The speed-dating format is a largely effective device but the constant interruption prevents a more nuanced exploration of Treya’s character...The effect is a little unsatisfying, as if we have only skimmed the surface of what lies beneath the hard armour...But Bhatt is a captivating performer whose acrobatic facial expressions and humour make it hard not to warm to Treya...This is a clever, moving piece and Bhatt gives a dynamic performance."
Read more

"'Treya’s Last Dance' is a delicious treat for the lunch hour: whip-crack sharp, funny and touching. It’s a one-woman show that feels more like a million-strong Dickensian cast...In under an hour, Bhatt’s performance builds the kind of character complexity you hope for in a feature film...Each of them is convincing and deeply charming. Bhatt is not only bang-on accurate but delivers her impressions with a kind of tender affection...Bhatt’s script is sharp and well-observed."
Read more