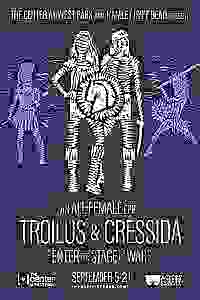 Hamlet Isn’t Dead’s Troilus & Cressida is a pulse-pounding, heartbreaking masterpiece of art and war. This all-female exploration of one of Shakespeare’s most testosterone-fueled plays, set against the backdrop of the Trojan War, is an epic like no other. Watch the Greeks and Trojans clash as Troilus and Cressida enter into a doomed love story from which few escape unscathed.

Dive into the action with Hamlet Isn’t Dead’s signature brand of immediate, intimate staging. Experience the live musical soundscape of harmony and warlike drums, highlighting the natural rhythms and theatrical urgency of the text. Thrill at the hand-to-hand combat that arises from a decade-long crusade with ancient legends like Achilles, Ajax, and Agamemnon. Enter the stage of war, and witness the unfolding of one of Shakespeare’s most gut-wrenching tragedies, which proves that “to be wise and love exceeds all might”.

See it if you like creative versions of WS's plays. Huge cast, w widely-varying degrees of talent. Enjoyable music before ea act and in Act I.

See it if you’d like a fast, smart, fully female accounting of a touching but somewhat problematic Shakespeare play, a love story in time of war.

Don't see it if the idea of an all female world disturbs you or you are expecting the full original play.

Also As I have written here in earlier reviews of productions from the company Hamlet Isn't Dead, I am a fan of HID’s smart, spare, free-wheeling way with the Bard’s work. The company’s usual virtues infuse its current production of “Troilus and Cressida.” I found the actors playing Cressida, Ajax, the sometimes scabrous Pandarus & the always scabrous Thersites particularly terrific. The choice to cut 2 of the original’s women characters seemed a bit odd, but perhaps was motivated by wanting to put women front-&-center in less typical roles. I endorse cutting Shakespeare, & am not so totally enamored of the scabrous bits toward the end of the play that are cut here. But doing so did leave us with what felt like no ending at all. Even the original leaves the plot unfinished. But leaving the play unfinished puzzled a lot of the audience.... Read more Read less

See it if you want to see an infrequently preformed play & support all female theater. A few of the women are marvelous, others are phoning it in.

Don't see it if you expect a feminist interpretation, only the pronouns have changed. Directorial choices make tracking the vast cast difficult.

See it if You want an all-female, enthusiastic, & game cast in 1 of Shakespeare's rarely seen plays w/themes relevant to today.

See it if you are up for an all women cast performing one of Shakespeare's lesser known, but riveting plays. These women are up to the task!

Don't see it if You prefer seeing men playing the roles of men, but why?

See it if It's a seldom-produced Shakespearean epic with no doubling. It's very well done. It's a good company with good actors. Go see it.

Don't see it if There are a LOT of characters and they can be a little tricky to keep track of, but unless you need impressive sets or male actors, see it.

See it if into a decent, charming at times production of a rarely seen play

Don't see it if you seek an interpretation that is either classic or edgy; this is mildly in-between.

Also a lovely troupe of female actors converts genders and pronouns, but as interesting as it sounds considering the all-male past, I found this a mild mishmash. Gender is a character, so they needed much bolder choices to make this work (blatantly-lesbian amazon warriors, perhaps?).

Kudos to this production for trying to differentiate the actors by color-coding the Greeks vs the Trojans and plastering pics of the characters around the stage. Despite all this and some before-hand reading, I just did not connect.

See it if you like Shakespeare, are interested in plays that are staged less often, want to support women-focused theater companies.

Don't see it if you can't abide changes to Shakespeare or don't like to watch women on stage.

Also I hadn't seen this play staged, and I really enjoyed this production though it gets a little complicated with how many characters there are. They do their best to make the action clear, however, providing pictures of all the characters and dressing the Greeks and Trojans in different color schemes so that you're not distracted trying to keep track. I also really enjoyed the exercise of having all the roles be women; some of it worked and some of it didn't in my opinion but it was fun to watch and see which parts were which. The music was great.... Read more Read less

Also I have seen & enjoyed many productions with women playing male roles, the difference here is that the characters are women. This involves changing pronouns from masculine to feminine and characters speaking of their sisters instead of brothers, romance is presumably lesbian. An interesting production, mostly enjoyable.... Read more Read less

See it if You are really into Shakespeare and can appreciate an all female team.

Don't see it if You’re not a big Fan of/don't Shakespearean language.

See it if You are a big enough Shakespeare fan that you'd enjoy seeing his lesser-known work re-imagined by a kickass group of women.

Don't see it if You don't like Shakespeare, or are a misogynist, or hate awesome fight scenes.

See it if you like Shakespeare and want to see a lesser-performed show done justice by a fine cast of actors.

Don't see it if you require luxury in your theatrical venues.

See it if You are willing to see an enthusiastic cast tackle one of Shakespeare's difficult plays, and don't expect perfection.

Don't see it if You are not accustomed to Shakespeare, or expect a perfect version of this difficult play.

Also The cast and director handle the comedy better than the tragedy of T&C. Cast gets an A for effort, but the director's vision is wobbly.... Read more Read less

See it if You're a Shakespeare completist, you're interested in love in war, you want to see a different twist on the Trojan War than the Iliad.

Don't see it if You dislike Shakespeare, you have something against single gender casts, you don't like tumultuous love stories

Also It is so amazing and heartwarming and unique (still!) to see women allowed to be good, bad, dumb, cunning, and everything in between. They do their utmost to distinguish the multitude of Trojan and Greek characters, and most of the issues with the play lay with the original source material - more time is spent with the Grecians than the titular lovers, and it has a somewhat abrupt emotional ending. My one complaint is their decision to play percussion beneath ALL of the dialogue - Shakespeare's words can stand on their own! And it just makes it harder to hear in an already echoing space.

Otherwise, the casting was wonderfully spot on (I can't imagine these characters as anything but now), and it was an honor to see one of Shakespeare's lesser known plays brought to life so thoughtfully.

See it if You like seeing Shakespeare in new ways. Some solid performances. Music incorporated really well and beautiful singing.

Don't see it if You’re a purist. Some performances stiff. Since all characters were referred to as she, would have been more coherent to call lords ladies &

See it if you like Shakespeare, all Female cast that kick ass, exciting fights, truthful acting, fantastic direction - a new look on a rare classic

Don't see it if You don’t like Shakespeare, live music, violence on stage, all female cast, or edited swift storytelling of classics.

Also The production is very ambitious on many different levels - artists will appreciate the work, dedication, & choices this team has created to share with their audience.... Read more Read less

See it if you like all female Shakespeare casts

Don't see it if you can't sit through a shakespearian play

See it if You enjoy Shakespeare really immensely

Don't see it if You are younger and don’t really understand Shakespeare and hamlet references.

Don't see it if you want to see classic plays done more traditionally.

See it if You like Shakespeare, Classical literature, or badass females throwing punches.

Don't see it if Definitely read the plot beforehand, they do a good job of making the text understandable, but there are a lot of characters.

See it if You're a Shakespeare nerd, like, watching women kick ass, and/or enjoy a good love story

“Troilus and Cressida (Hamlet Isn't Dead)” hasn't been reviewed by any Critics (yet!)

Hamlet Isn't Dead
Producer
Get Alerts Alerts On Alerts Off 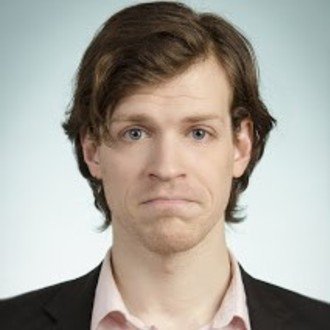