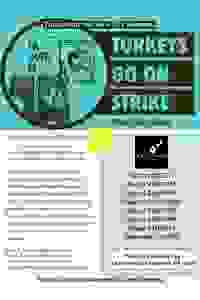 Turkeys Go on Strike (Dream Up 2019) NYC Reviews and Tickets

This world premiere musical tells the story of a group of minorities (turkeys) fighting against oppression and brutality from humans. Part of Theater for the New City's Dream Up Festival.

This show centers on Turk, a young turkey who feels as though his towns local government has been plagued with greed, corruption and other scandals. While searching for answers Turk, with the help of his friends, uncovers the dirty truth behind their town's political figures and fights to save the place from oppression and brutality. It is up to the flock to save the town from corruption, fight for their species from oppression and brutality and to finally receive acceptance for who they are. Social issues such as the Black Lives Matter movement, the treatment of indigenous people, police brutality and political corruption are viewed from the perspective of turkeys, providing a clear-eyed satirical look at the social climate of today. Music ranges in style from classic musical theater hits to Hip Hop to 60s Doo-Wop to Tango and more.

See it if You like contemporary satire. Never getting too preachy or dark but definitely taking a stand. Songs with substance, sung with heart.

Don't see it if You can’t lighten up. This is definitely a show that needs work but it’s fun to see it in its early stages. Read more

See it if If you like a silly musical that tries to be edgy with an underlying political message.

Don't see it if This show needs work and was not ready for production.

See it if you's enjoy a new musical in its early stages with a talented cast pouring out lots of energy providing some laughs and important messages.

Don't see it if you want a refined production - bare stage with few props, recorded music - great to just okay voices, and it runs longer than advertised.

See it if Impressive singing and choreography by youthful cast on a black box stage. Variety of musical styles. Light fun.

Don't see it if Bizarre story about talking turkeys fighting for equal rights with humans, while avoiding being eaten. Dialog drags.

See it if You see little of everything in this show, dancing, singing. Very enjoyable and funny.

Don't see it if Want serious play or a perfect show. Read more

See it if If you love theater or are a musical theater pro you MUST see this show.

Don't see it if you can't tolerate a weak book or a confused score. Read more

See it if you enjoy supporting up and coming talent/new work in development.

Don't see it if you're looking for a production that's polished and well-thought-out. Read more

See it if Clever, quirky, message inflected musical might be your cup o'-shows what talent and imagination can yield without necessity of gazillions.

Don't see it if You want a totally polished production-this is antithesis of Bway blockbuster in every way, yet could end up with wide audience if sharpened Read more