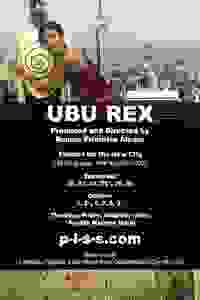 Over a landscape of NYC skyscrapers, the Fecal Tower looms, the tallest building on the planet. At the very top is the penthouse where the CEO lives with his family. Far down below, in the first basement, is the home of Papa and Mama Ubu. Papa Ubu is the slovenly superintendent of the Fecal Tower, content to glut himself on porn and PBR. But his wife, Mama Ubu, is a true Lady (Macbeth) who is always scheming for more. Mama is hungry for riches and power; Papa is just hungry. Together they plot to overthrow the CEO and put Papa’s fat ass on the throne. With Mama’s wiles and Papa’s propaganda, they rally a band of thugs and thieves to help them ascend the Fecal Tower to power! Papa proves himself as a ruthless ruler as they embark on an odyssey to become the ruling class.

See it if You enjoy creative expletives and delight in absurdist humor and laughing at the expense of Donald Trump.

Don't see it if You do not enjoy crude humor, like Donald Trump, are a fan of Ubu Roi, or expect Trump impressions to be good. Read more