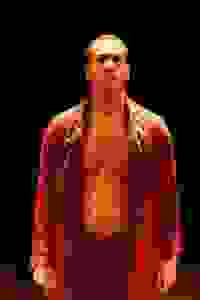 Metropolitan Playhouse presents the story of a bright young man with quick fists is given the shot to be a champion boxer... if he is willing to accept the racist rules that govern America of the 1930's.

The play opens by introducing us to Andy Whitman, a shoeshine boy with a mean left hook. The handsome teenager is taken up by big Mack, a real loser of a boxing promoter. Initially, neither the young man, his ambitious father, his grandmother or his girlfriend Ruth are all that certain about a career in which the boy might get his head knocked off. To make things worse, Andy is a proud man who will not accept the standards of his day. Demean his race or ban him from a hotel and the odds are that he will lay you out. Along comes a greasy, racist promoter, Lou Foster, who will stand for no nonsense from any fighter, let alone a black one.

Sort by:
B
barbaramatney
3 Reviews | 0 Followers

See it if you like intimate period plays about issues that continue to resonate in our contemporary life: racism, classism, the power of money.

Don't see it if you prefer spectacle over substance.

"This gritty, Damon Runyanesque play will keep you on the edge of your seat…Imani’s direction is like greased lightning and the play moves swiftly along from the moment the lights come up on the opening scene which grabs you by the throat and never lets up…Imani’s production of 'Walk Hard' is an exciting piece of theater from an eye-opening rediscovery."
Read more