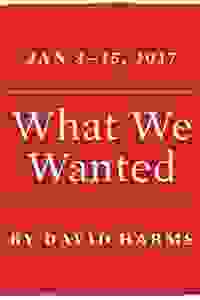 View in admin
What We Wanted
NYC: Midtown W
58
Score it Scored!

What We Wanted NYC Reviews and Tickets

Skyhook Productions presents a new drama about three lovers living together on a small college campus in rural Ohio, whose polyamorous romance starts to unravel.

Julian, Agnes, and Sally have been living and loving together happily for years, but all that seems poised to change. Professor Julian's affair with a younger colleague blows up when she is denied tenure and files a complaint against him. Agnes receives an offer to become the top editor of the literary magazine she works for, but must move to NYC if she wants the coveted position. Sally, an elementary school teacher, is helping her daughter Reggie's boyfriend study for his GED but crosses boundaries with the smitten young man. And Reggie exacts revenge on her mother, fueled by bitter resentment.

See it if You're into edgy theatre, which explores different topics. It's risqué!!! It starts of pretty good, but, 1 HR 40 min started to feel long...

49
I did not like the acting, the directing, or the play itself, and felt that i wasted my time.

Don't see it if You like good acting and a good play.

See it if You want to see a somewhat decent stab at a show about polyamory, that'll lead to great conversations with friends afterwards.

Don't see it if You have low tolerance for pretentious bullshit about poetry and literature, or grow weary of ALL characters having sexual tension together

See it if you want to see a work in progress. needs editing and rewriting but the topic could produce something interesting.

Don't see it if the playwright is trying to hard to impress us with his poetic abilities.

See it if you're up for a pretentious night of theatre and an under developed script. Very good work by two young actors who tried keep show together

Don't see it if you can't sit through a long indulgent show w/o an intermission, you want good quality acting and writing and are looking for substance

See it if You hate spending $125 or more for shows that disappoint.

Don't see it if you are a critic!

"Truly one of the most intriguing plays I have ever seen performed...'What We Wanted' is just so raw and artistically realistic, but is so in the most unconventional of ways; it leaves the audience questioning how something like this can be real but also demonstrates that humans are fundamentally the same and yet so far apart...The actors who made this all possible...are all spectacular as they navigate their way from happiness through to despair, and all the chaos that happens in between."
Read more

"Set in a small Midwestern college town, the play though well written does not seem real. Had this ménage-a-trois been located in NYC's Greenwich Village or Chelsea, one wouldn't find it so implausible. Additional items also damage credibility. Although it is not clear in the play, the script states that the three live in faculty housing at a small all women's college. More and more strange."
Read more

"Still feels like a work in progress. The words have a playful rhythm and charm, but as we dive deeper into his world, the inexperience to create depth and realistic moments becomes evident...Harms is trying too hard to enrapture us, enthrall us, and impress us with phrasing and intellect, while simultaneously not trusting us to see the complexities...The actors do a magnificent job...but the impulses and motivations register as haphazard and not of this earth."
Read more

"I’m afraid David Harms' initial effort has 'first play' written all over it like subway graffiti. It cries out for editing. Scenes drag on. There are at least three successive endings. Original poetry ranges from spot-on to obscure. Sally’s behavior towards Dale, made even less credible by stage direction, is too out of character to read true...Elizabeth Rich’s naturalistic performance as Agnes is the best thing on stage, sometimes necessarily acting as ballast."
Read more

"The way Harms allows his story to unfold is melodramatic with a soapy undertone. The baffling plot is expected, many twists projected scenes ahead...Harms introduces a highfalutin language for the characters that detracts from the authenticity of the characters, often teetering on the border of caricature...'What We Wanted' is very much a play in progress that shot for the stars and missed in this big production. Harms has a lot of fleshing out to do before the next iteration."
Read more

"Unfortunately, the intriguing premise didn’t live up to the expectations. Despite all the jokes and touching moments, the play feels flat and fails to engage the interest. Drew Foster directs the well-fitted ensemble of five in a rather restrained manner...Perhaps by placing the action in this allegoric environment, Drew Foster tries to elevate a living room drama to a metaphor of something bigger than just struggles of everyday people. Unfortunately the effort falls short."
Read more