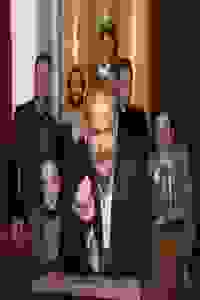 View in admin
'Wives' and 'The Academy'
NYC: East Village
Score it Scored!

'Wives' and 'The Academy' NYC Reviews and Tickets

Theater for the New City presents a double-bill of Mario Fratti's plays: the world premiere of 'Wives' and his breakout hit,'The Academy,' that together illustrate the changing nature of the battle of the sexes.

In 'The Academy,' set in 1950s Venice amid the postwar nihilism and defeat, a reactionary professor has organized an 'academy' to teach young Italian men how to seduce and exploit American women. The six young gigolos who are his students are enterprising young men.

'Wives,' a world premiere, was written recently and offers a contrasting view of American women. Instead of being victimized by an opportunistic man, they are firmly in control. 'Wives' displays a definite power shift in the battle of the sexes.

"Snap to. It’s a high compliment to say that these two one-act plays, 'Wives' and 'The Academy,' made me feel as if I was standing at one end of a rope that I had just snapped, watching the vibration loop through to its surprising, inevitable conclusion, producing no sound at all, just the silence of a realization, like a joke with a serious punch line, if such things exist."
Read more

"So why not see Fratti’s current double-bill, clocking in at just eighty minutes, and get a good look at the battle of the sexes in these two bite-sized dramas? This production has no bells and whistles or special effects, but with tickets priced at only $12, you can’t go wrong."
Read more