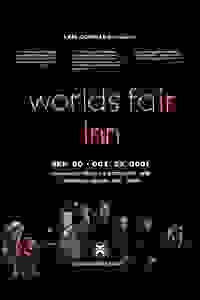 A dark comedy inspired by the failures and genius of 3 well-known historical and fictional figures.

For a limited time only at the Axis Theatre, Randy Sharp's vaudevillian comedy Worlds Fair Inn is back! The dark and sometimes deranged play takes its inspiration from three unlikely men: J. Robert Oppenheimer (the father of the atomic bomb), H. H. Holmes (an American serial killer), and Victor Frankenstein (yes, that one). Called a "uniquely charming" absurdist play by This Week in New York, the one-of-a-kind story adeptly moves between low and high comedy regardless of its serious subjects.

See it if you are curious as to what might happen if Vladimir, Estragon & Pozzo decided to recreate the Bride of Frankenstein. Good acting & direction

Don't see it if you like plays that are on stage for a longer time than you spend on the subway coming & going. About 1/3 of the tiny audience slept.

See it if You have a friend in the cast. You have some knowledge of true crime.

Don't see it if You want challenging, essential theatre. Why a play with so many white men in 2021? Audience members were falling asleep.

See it if You love experimental theater

"While the play itself is a little bewildered and may not hold up 100% under scrutiny, it makes up for any messiness by wielding these concepts in vastly interesting ways. After my initial confusion, I found that like the tip of an iceberg, the play yielded more upon deeper reflection."
Read more

View in admin
I
Adrian Dimanlig

"It’s a fever dream of a play, which sustains a dreamlike state through its stylish staging and design elements (lighting, sound/music, costumes, and sets are all thoughtfully considered and expertly realized). The excellent cast, which includes singular downtown actor Edgar Oliver, delivers the play’s recurring and inter-weaving motifs with hypnotic precision."
Read more