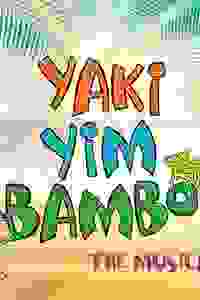 Based on the play 'The Island of Yaki Yim Bamboo,' this tuner takes place on a magical island in the West Indies inhabited only by kids! Adults aren't even allowed to visit and don't know its location. But when one of the isle's residents enters adolescence, he knows his days at home are numbered and he's scared of leaving and never being able to return. A colorful, coming-of-age tale that's best for elementary schoolers.

See it if you have young children. The intimate theater allows for audience participation & individual interactions. Imaginative fun songs and setting

Don't see it if you are looking for strong plot or complex character.

See it if You want a fun show for the whole family. You want very good music w/a Caribbean twist. You enjoy audience participation.

Don't see it if You don't like children's shows. You don't want children in the audience.

See it if you have young kids and want to see a charming, family friendly show.

Don't see it if you don't have kids, or you have teenage kids. Not good for date night, either.

See it if You want something for young children. The kids in the audience loved it. They get to go onstage & participate.if they want. Lotsa fun.

Don't see it if You want a play for kids which doubles as one for as one for adults-this is definitely a kiddie oriented show. Its enuf to just enjoy them!

See it if You want to bring young kids to a musical specifically for them & if they've never been before. The ensemble was excellent & 1 hour long.

Don't see it if You don't like kids or a kids show. It did have some darker scarier parts but they are related to children's fears like fear of the dark.

See it if My 9yo and 12yo daughters both loved this. My shy 12yo even jumped up to join the limbo line after the show.

Don't see it if It's one fun and affordable way to spend an hour with kids. There is obstructed view seating so get there early to get a good seat.

See it if You have a child under 8 years old and they like musicals or theaters. Kids are invited to sit up front and interact with the cast.

Don't see it if Your child is over 10 years old.

"Using song, dance, and story elements, 'Yaki Yim Bamboo' aims to portray daily aspects of Caribbean culture...While the actors all performed ably, it seems a missed opportunity that there were no authentic Caribbean accents among the cast...The caricatured dialects quickly wear out their welcome...Although my four-year-old daughter couldn’t recount the main conflict or other plot elements, this did not impede her enjoyment...The songs in 'Yaki Yim Bamboo' are delightful."
Read more

"This musical gives a glimpse of life in the Caribbean, and it allows the use of imagination where all of our dreams can come to fruition. The audience gets the opportunity to go beyond its boundary, and it creates another world to explore in terms of culture. The writer’s message resonates with the audience in the portrayal of culture, geography, and zoology. In addition, he addresses the emotional side of life where some children refuses to grow up."
Read more

"Fred Rohan-Varga’s endeavor of love is an enchanting delight and certainly much more entertaining than I thought possible for an old fogey like myself...'Yaki Yim Bamboo' is enchanting, funny and a very charismatic show that proves to strike gold by interacting with the audience...I really enjoyed it and left wondering what Disney would do with a tale like this. Why isn’t Mr. Roha-Vargas and company pitching this to a major studio?"
Read more

"The creators of the musical can take a bow for staging a production that easily seeps into everyone’s consciousness, no matter what age. The story is strong, and its use of music, puppetry, and movement, merged with a hybrid mash-up of Afro-Caribbean aesthetics make for a beautiful theatrical event...Please take your children to see this, their response and participation were the best part of the entire island, it was indeed made for them."
Read more