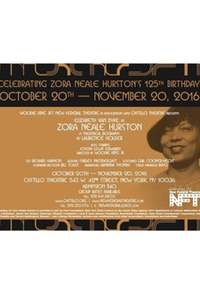 New Federal Theatre revives its bio-show about the celebrated 20th-century African-American writer known as 'The Queen of the Harlem Renaissance.'

Best known for her novel 'Their Eyes Were Watching God,' Zora Neale Hurston was a prolific novelist, playwright, and journalist of the 1920s and '30s. She walks the audience through her remarkable life in Laurence Holder's bio-play, which captures her uninhibited and outspoken personality, chronicles the rise and fall of her literary career, and, above all, reveals her place in the politics of her lifetime, from the '20s to the early '60s. The play is rich with intimate portraits of her contemporaries, including poet Langston Hughes and novelist Richard Wright, and sparkles with excerpts from her significant works including 'Mules and Men,' a 1935 collection of powerful folklore.

See it if you want to learn a very general notion of who this woman was. It's an entertaining evening but falls short of being what it aims to be.

Don't see it if you expect to learn any real history or gain any real depth of character.

See it if you are interested in the Harlem Renaissance and the many artists who participated in it. There is charming storytelling and dancing too.

Don't see it if you are interested in a detailed biography. Large sections of her life are skimmed over with brief references.

See it if You do or do not know the history of Zora Neale Hurston. You want to hear a good story and get a history lesson. You like simple staging.

See it if you know ZNH's work & want an overview of her history; the play has its moments but is more like a 'cliff notes' summary of her life.

See it if A representation of a complex life with attendant conflicts in black history. Superbly acted and will make you run to WIKI for further info.

See it if You are interested in the story of an African-American female writer in the mid twentieth century. Great acting.

Don't see it if If you aren't interested in biographical plays, or are looking for dramatic action.

See it if you like historical biographies and strong female characters

Don't see it if you don't like strong female characters

"Elizabeth Van Dyke as Zora Neale Hurston is authentic and beautiful. Van Dyke inhabits Hurston in all her personas. When Van Dyke tells a story, a folktale, she becomes Zora...This theatrical biography by Laurence Holder presents Zora to us in all her strength and complexities...Joseph Lewis Edwards is also authentic and beautiful as four men who impacted Zora’s life...The chemistry between Edwards and Van Dyke is wonderful."
Read more

"In a majestic, dynamic and anguished performance Elizabeth Van Dyke tells her story in the first person...Woodie King Jr. directs a hyper-emotional Ms. Van Dyke in a series of flashbacks that tells us of her glorious journey from Florida to New York City’s heights of glamour. The magic of autobiographical theater took hold of me...Don’t miss this chance to share in the comedy, drama and intensity of American literary society."
Read more

"Not only important history but breathtaking performances. A theatrical biography could be tedious, but Laurence Holder’s 20-year-old piece is stunning...The performances of Elizabeth Van Dyke and Joseph Lewis Edwards, recreating their original roles, show the advantages of maturity...The staging of the piece by director Woodie King, Jr. overcame most of the limitations of the very small stage space. We needed very little more than to watch the performers at work."
Read more

"Those who love Hurston's signature novel, 'Their Eyes Were Watching God,' must see this show. Young people unfamiliar with this author, must see this show. What an experience!...From the intimate to the cosmic, from the personal to the historical, the writer never compromises the truth. Joy dominates the performance...Director Woodie King, Jr. creates magic, using the space to effectively take the audience along the winding path of a complicated, demanding journey."
Read more

"Regardless of what production arrives this season, there will be none better, thanks to the phenomenal performance of Elizabeth Van Dyke as Hurston. Van Dyke encompasses the heart and soul of her character. You smile when she is witty and sassy, or feel the tension as she speaks out in protest or quarrels with Hughes...'Zora Neale Hurston' is at the zenith of importance and acting ability. Witnessing Van Dyke as Hurston will become one of those noted theater history moments."
Read more