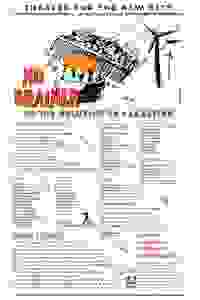 View in admin
No Brainer, or The Solution to Parasites
NYC: Midtown W
81
Score it Scored!

No Brainer, or The Solution to Parasites NYC Reviews and Tickets

Theater for the New City's rip-roaring musical portrays our road to national madness as a bad trip to Hades. The production is free and will tour parks, playgrounds and closed-off streets throughout the five boroughs.

A Social Service Provider (working for the NYC Department of Social Services) is not interested in politics at all. He is fighting valiantly in the natural world to protect families facing eviction, children in temporary housing and immigrants struggling for citizenship. But the mythic world, headed by Mr. Pluto, is set on edge because a raging, somewhat drunk real estate magnate from a TV reality show has invaded its sacred sanctuary in Hades. There he has drunk deeply from the cauldron of woes--a vessel where the underworld gods cleanse a nation's soul by boiling out its historically tragic mis-steps, including those of genocide, slavery and war. Ravenous for notoriety, he slurps down the steamy stew, gobbling down all the horrors and recklessness to which our time is heir. The bubbling brew, extracted from the garbage of history, is full of parasites, which infect his brain and direct the would-be dictator/strongman toward the highest office in the land.

See it if you'd enjoy a current review of NYC and the USA's opportunities and challenges with a political bent by enthusiastic actors and musicians.

Don't see it if you don't like people distractions at free events or cannot enjoy low budget productions in outdoor daylight. No program to know who's who. Read more

See it if you enjoy playful political satire in a park setting with inventive props, insightful script, multicultural actors, and zippy musical tunes.

Don't see it if you are easily offended by honest theater about many social ills of our city, discussion of horrific historical events, and Trump in Hades!