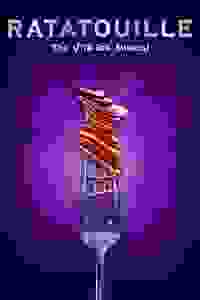 Based on the movie, written by fans, and starring some of Broadway's biggest talent.

After a surprising start on the social media platform TikTok, fans have come together to create an original musical version of Disney/Pixar’s “Ratatouille.” This tribute stars Titus Burgess, Adam Lambert, Ashley Park, Wayne Brady, Andrew Barth Feldman, and more. More than anything in the world, Remy the rat wants to become the greatest chef in the world. Though he has a gift for cooking, rats have never been welcome in a kitchen. By chance, he makes an unlikely friend in Linguini, a restaurant dishwasher. The two hide Remy’s true identity and capture the attention of the culinary world. Will their fame cause their secret to be revealed?
Read more Show less

See it if you have a fun sense of humor, because this show does, too. I've never seen the film, but this gem made me want to.

Don't see it if you won't watch virtual content.

See it if You miss the joy of live theater - the performers’ happiness radiated through the screen. Truly a pleasure to see and absorb!

Don't see it if You are expecting a slick, flawless coherent whole - part of charm is unevenness of editing, costuming and singing