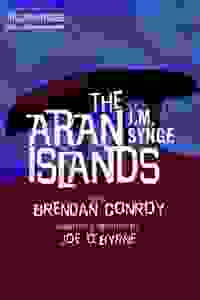 The Aran Islands: A Performance On Screen NYC Reviews and Tickets

Irish Rep presents a recording of its 2017 production of JM Synge's play adapted by Joe O'Byrne.

In the grey, sea-battered landscape of the Aran Islands, hearth is home. When John Millington Synge traveled to these remote islands, he discovered a bleakly primitive, mystical land that would inspire him to write some of the greatest works in Irish theatre. "The Aran Islands: A Performance on Screen" is the beginning of his love affair with the area. Brendan Conroy, one of Ireland’s finest actors, captures the spirit of Synge in O'Byrne’s theatrical adaptation of Synge’s early work.
Read more Show less
Buy tickets from $25

See it if video performance of The Aran Islands gives an enchanting mix of fine poetic language, narrative, character acting and cinematography. Tops!

Don't see it if you dislike poetic narratives, great acting, diverse characterizations in a one-man show or filmed performances. I found this captivating.