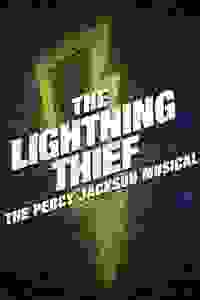 This "winning adaptation" (The Hollywood Reporter) of the best-selling Disney-Hyperion novel by Rick Riordan, The Lightning Thief: The Percy Jackson Musical is “a colossal, crowd-pleasing hit of Herculean proportions!” (Broadwayworld.com). The Greek gods are real, and they're ruining Percy Jackson's life. As a son of Poseidon, Percy has newly discovered powers he can't control, monsters on his trail, and is on an epic quest to find Zeus's lightning bolt to prevent a war between the gods. Nominated for 3 Drama Desk Awards including Best Musical, The Lightning Thief “hits the sweet spot” (Wall Street Journal) and provides “a spectacularly fun adventure that will thrill everyone in the family!” (Chicago Parent).

See it if you enjoy adventure fare decidedly aimed at teens and adolescents. I do; we were all kids once!

Don't see it if you want highbrow drama or something designed to appeal to theater’s demographic of the past/present, rather than audiences of the future.

See it if you're familiar with the Percy Jackson books and movies. The entire story is told with minimal sets. The cast was very good.

Don't see it if you have no clue who Percy Jackson is. More mature audiences may not get what's going on, but may still enjoy some of the catchy songs.

See it if You want to have a fun time with a fluffy show not super deep. Kids will love this show.

Don't see it if You prefer a show with serious plot.

Don't see it if You want a good show. It’s merely okay and if you're a stickler for correct Greek mythology this ain’t it Read more

Don't see it if Just don’t trust me you will thank me later.

See it if You love Percy Jackson, children's stories, or shows with simple staging. This is an absolutely delightful show for all ages.

Don't see it if You like big, flashy musicals with large casts.

Don't see it if You expect special effects or good stage settings. The stage design is way too simple.

See it if If you are a fan of the book! It followed the story very well with clever music and staging.

Don't see it if You are not a fan of a fun night out!