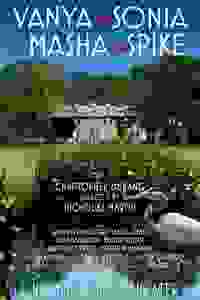 View in admin
Vanya and Sonia and Masha and Spike (From the LCT Archive)
NYC: Virtual
80
Score it Scored!

A filmed version of the Lincoln Center Theater production. Vanya and his stepsister Sonia have lived their entire lives in their family's farmhouse in Bucks County, PA. While they stayed home to take care of their ailing parents, their sister Masha has become a movie star, leaving Vanya and Sonia behind. Their soothsayer/cleaning woman Cassandra keeps warning them about terrible things in the future, which include a sudden visit from Masha and her twenty-something boy toy Spike.
Read more Show less

See it if you'd enjoy watching some terrific actors perform material that's enjoyable if not original.

Don't see it if you don't like watching plays online.

See it if You want to see some fun actors in a light piece..interesting to see the play on chechov

Don't see it if You only want to see live theater, but in these times it was great to see IT