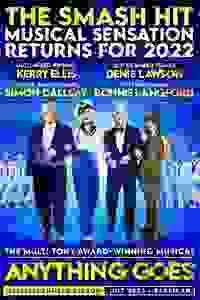 A revival of Cole Porter and P.G. Wodehouse's award-winning musical comedy set on a passenger ship.

The classic musical comedy follows the antics of the colourful characters on a ship headed from New York to England.

The score by legendary musical theatre composer Cole Porter includes favourites such as 'It's De-Lovely!' and 'You're the Top'.

See it if you love an old-fashioned silly romp w/great tunes & even better dancing. I didn’t care how the goings on turned out but enjoyed the ride.

Don't see it if you need more substance than silliness and flash.

See it if you want an evening filled with humour, great singing, and great dancing. A de-lovely revival of a wonderful show.

See it if You want to see some veteran performers giving great performances, and some great song and dance numbers (and tap!)

Don't see it if You want a musical with a bit more substance and plot. This is very much all about the singing and dancing

See it if you love a funny musical with classic Cole Porter songs, or if you love tap dancing.

Don't see it if You don't like classic musicals or you hate tap dancing.

See it if You like a classic musical with big dance numbers.

Don't see it if You want something newer and edgier. This is a classic musical.

Don't see it if You’re not a fan of old school musicals with dated themes.

See it if You enjoy big dance numbers and upbeat, feel good musicals.

Don't see it if You want a serious show which explores deep themes. Anything Goes is light and entertaining.

Don't see it if you don't enjoy musical, especially old fashioned ones

"If I have any reservations it’s that the terrific band occasionally drowns out Porter’s deft wordplay, and after the dazzling pace of the first half there’s a slight loss of momentum in the second. But, honestly, those are quibbles. This production is a dream."
Read more

"There’s the odd contemporary parallel, like the satire of our obsession with celebrity, but, just like when it was first staged during the Depression, this is really about stepping into another world and leaving our troubles behind. Quite simply: it’s the top."
Read more

Imported Broadway star Sutton Foster effortlessly steals every scene as Reno with a devastating mix of raw talent ... and sheer, gutbusting effort. They don’t make ’em like this anymore ... but it feels fresh.
Read more

Director and choreographer Kathleen Marshall ... crams the two-hour ride with cheesy, feel-good moments: this is vintage stage magic at its most explosively joyous.
Read more

Director Marshall keeps a tight ship, as it were, the neat set-ups and unnecessary complications of the plot weightlessly executed. Anything Goes revels in how ridiculous it is, and the audience does too. This is one to get drunk on, hangover-free.
Read more

[The show is] held together by a fabulous central performance from the American star Sutton Foster as Reno Sweeney. Throughout the show, there is a demob-happy feeling – in cast and audience. It is exactly what the captain ordered.
Read more