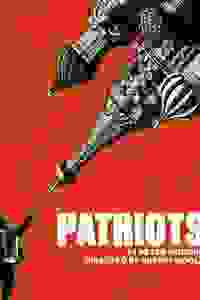 Tom Hollander stars in Peter Morgan's new play set during the fall of the Soviet Union.

As a new generation of oligarchs fights to seize control of Russia's assets, billionaire businessman Boris Berezovsky hustles his way into the President's inner circle. 'Patriots' charts his rise to the top of Russia's elite and his fall from grace, becoming enemy #1.

Don't see it if you don't like long plays, subject matter (the story of Russian oligarchs) does not sound appealing or looking for lighter theater fare.

Don't see it if politics isn't your thing Read more

83
Starts well, but the ending disappoints

See it if The 3 main actors are all very good. The actor who plays Putin is wonderful. Tom Hollander is fine and clear.

See it if you like shows about history, Russia, politics, socioeconomics, or you're a fan of Tom Hollander.

Don't see it if you like light and fluffy shows and/or find historical recountings of events dry and unenjoyable. Read more

"It’s an interesting, informative play, with three great performances in Hollander’s brilliant, quicksilver Berezovsky, Keen’s hypnotically plausible, hangdog Putin, and Luke Thallon’s Abramovitch, essentially a nice enough guy who realises he needs the patronage of the others to succeed and sucks it up humbly, becoming stupendously rich in the process."
Read more

"Goold’s direction is economical and unremittingly pacy, but assigns random regional accents to characters willy-nilly. The shoehorning of facts into dialogue, and the deployment of Berezovsky’s mathematical interest in infinity and the science of decision-making are a bit obvious. But overall this is a cracking, exciting piece of theatre that’s become, sadly, very timely."
Read more

"Morgan’s play certainly draws our minds to how Russian’s 1% ended up here, playing out their power battles in UK courtrooms as was in the case with Berezovksy and Abramovich, and as fascinating as this post-perestroika era may be, it begs for a far fuller look at the London connection."
Read more

"The director, Rupert Goold, manages to impose some sort of shape in the first half... By the second half, however, Hollander can’t lift a script that limps from one crisis to another as the shadows close in. "
Read more

"Morgan has inarguably produced a work that speaks to the moment – not just in terms of the war in Ukraine, but our own political squabbles."
Read more

"The West End, and indeed Broadway, should surely ready themselves for a benign Russian invasion as Peter Morgan's drama hits the Almeida."
Read more

"It's highly watchable, and moves at a lick; Morgan writes with admirable precision. And it's good to get an insight into the machinations of the Russian state at a time when they're threatening to destabilise the world."
Read more