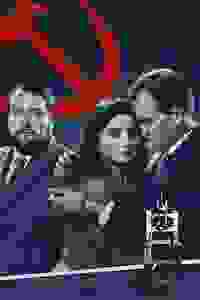 View in admin
The Rubenstein Kiss
London: Elephant and Castle
Score it Scored!

James Phillips' play is based on the true story of a Jewish couple who were charged with espionage.

During the 1950s, Jewish couple - Jakob and Esther Rubenstein are betrayed and charged with sharing atomic secrets with the Soviet Union. The play explores the politics and the morals of McCarthy's America during the Cold War. Directed by Joe Harmston.

Joe Harmston's terrific revival is alternately precise and anguished. Phillips's clever folding of past and present... unfolds the action like a mystery to be solved.'
Read more

...ripe for revival but the story asks more questions than it answers... The few stirring scenes reach beyond politics... One wishes for many more of these moments.'
Read more

Phillips’s detailed and at times laborious drama doesn’t come to any startling new conclusions...but instead rather hedges its bets as it wends its meticulous way through elegant, occasionally overwritten scenes.'
Read more

The play is, quite unashamedly, a homage to Arthur Miller... It’s impeccably acted... At over two and a half hours it’s overlong, but it’s an intimate, emotionally charged revival nonetheless.'
Read more

Slick spy drama doesn't quite come together. Excellent performances aren't enough to cover the holes in this fictionalised account of the Rosenbergs.'
Read more

The performances are moving...At two hours and forty five minutes it's a long production and it suffers slight dips in pacing, but has some relevant commentary on fraught political climates.'
Read more