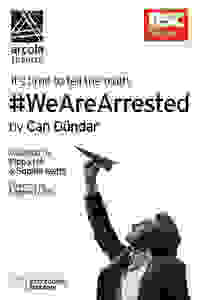 A stage adaptation of a book by Turkish journalist, Can Dündar, who was arrested for his work.

The play centres on Can Dündar, who was arrested for publishing evidence of arms deals between Turkey and Syria. A co-production between the Arcola Theatre and RSC which highlights the importance of maintaining the free press in our increasingly divided society.

Gripping but weirdly anonymised adaptation of editor Can Dündar’s memoir about his arrest by the Turkish state...The show’s almost procedural flow of detail exerts its own pull...'
Read more

A politically-charged hour of storytelling...At a gripping, rapid 75 minutes, #WeAreArrested is an urgent piece of theatre which asks us to scrutinise what we know is true, and how we can fight to keep it so.'
Read more