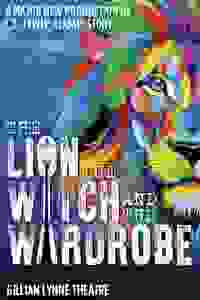 View in admin
The Lion, the Witch and the Wardrobe (London)
London: West End
86
Score it Scored!

The Lion, the Witch and the Wardrobe (London) London Reviews and Tickets

In order to escape the Blitz, siblings Peter, Susan, Edmund and Lucy Pevensie are evacuated from London and sent to the English countryside to live with Professor Digory Kirke. While exploring her new home, Lucy looks inside an unassuming wardrobe, and is suddenly transported to the snow-covered wonderland of Narnia. She befriends a faun named Mr. Tumnus who tells Lucy about the White Witch; the false ruler of Narnia who has kept the land in a perpetual state of winter. The siblings work together to overthrow the evil witch with the help of the true ruler of Narnia, a lion named Aslan.

This critically acclaimed theatrical production, adapted from the first book in C.S. Lewis' fantasy novel series 'The Chronicles of Narnia', returns to London after running at the Bridge Theatre in 2019. The production debuted at the Leeds Playhouse in 2017.

Directed by Michael Fentiman ('Amélie The Musical') with puppetry by Craig Leo ('War Horse') and starring Samantha Womack ('Eastenders', 'The Addams Family'), 'The Lion, the Witch and the Wardrobe' is an enchanting family show.

This production is recommended for ages 6+.

See it if you want a fun show that will make the whole family smile. If you enjoy the classic and love upbeat music with live instruments and fun sets

Don't see it if you dislike puppetry, or diverse casting of a classic. If you aren’t fond of classic staging and theatre magic.

See it if If you enjoyed the book, like actor-musician productions, Some nice use of music and some of the design did work

Don't see it if Too long at 150 minutes. Pacing dragged on and there is a distinct lack of magic.

See it if You love the original book and are a fan of magic. There is some great use of staging and I'm a sucker for actor/musician shows.

Don't see it if You don't enjoy musicals. First half felt slightly slower and could have been a bit quicker paced.

See it if a great take on a clissic tale , thy usea the stage well and it was very dramatic ,

Don't see it if if you want to be blowen away

See it if A lovely childhood fantasy come to life on stage, great acting, singing and stage set up. A must see if you loved the books and film.

Don't see it if If you're not into fantasy or don't like the books or film, or strobing light effects.

See it if resonant and reflective storyline, are a fan of the books

Don't see it if you prefer more upbeat musical style

See it if Brilliantly put together, my sons first theatre trip, he's 12 and really loved it. Great acting and clever how they've brought it to stage.

Don't see it if You don't like children's fantasy stories or if you're looking for a full on musical it's more of a play. Read more

Don't see it if Nothing really negative to say but I was hoping the Lion would have been a better character. I think this could be done much better.

"That halfway house aside, the show deserves full ones. The West End may be spoilt for choice with family treats, but this is British theatrical verve at full pelt."
Read more

"It’s ponderously slow and woefully short on magic. ... The production’s shortcomings enable us to take a fresh squint at a cultural totem."
Read more

"The pace has a stately grandeur; nothing is rushed and some scenes come to feel a little inert. The siblings, played efficiently by adult actors, are a little featureless at first but these are quibbles in a show that is orchestrated masterfully."
Read more

"This vision of Narnia’s landscape lacks grandeur and mystery; even the frost seems less beguiling. ... The opening steam train journey still takes the breath away, however, with the miniature carriages carried aloft by members of the ensemble in a sequence full of balletic grace."
Read more

"Some of its quirkier edges may have been knocked off, as a first introduction to a children’s classic, or a treat for a young bookworm, it’s hard to beat."
Read more

"There is much to bewitch young children, and by the end it takes you to another dimension in all the right ways. In a golden age of puppetry in the West End, this joyful interpretation more than holds its own."
Read more

"There's no better escape than 'The Lion, the Witch and the Wardrobe'. ... The winter blast invites audiences into a magical Narnia world where everything feels a little bit more beautiful than reality."
Read more