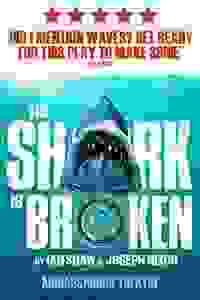 View in admin
The Shark is Broken
London: West End
25
Score it Scored!

The Shark is Broken London Reviews and Tickets

A hilarious new play takes a behind the scenes look at the making of the blockbuster film, “Jaws”.

See it if you're a fan of Jaws but not that much of a fan that you know all the fun facts because this show will Wikipedia-page them right out at you.

Don't see it if you're looking for original, thought-provoking theatre. Read more

Put another way, The Shark is Broken has a freewheeling quality ready-made for Festival high spirits after a pint or two. But both the writing and acting need no small degree of fine-tuning if this is to go the full commercial distance.
Read more

This shark-tooth-sharp comedy, which has swum relatively seamlessly down to the West End from the 2019 Edinburgh Festival, is an enjoyable three-hander about the near-disasters behind the scenes in the film’s final sequence.
Read more

Ian Shaw does not hold back in baring his old man’s flaws. Robert was plainly a self-pitying bully, a bad loser prone to gambling and drinking songs. He had dramatic presence, though, and so does his son, who co-wrote this watchable 90-minute play.
Read more