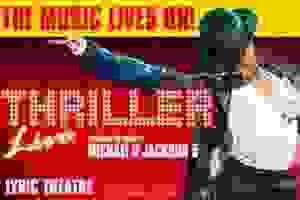 Seen by over five million people in over 30 countries, "Thriller Live" continues to moonwalk around the world, taking you on an electrifying audiovisual journey through an unparalleled catalogue of hits.

A spectacular high octane celebration, Thriller Live at the Lyric Theatre is a tribute to the King of Pop, Michael Jackson.

First performed in 2006, Thriller Live moonwalked into the West End after three acclaimed UK tours and standing ovations across Europe. In a career spanning 40 years, Michael Jackson sold an unparalleled 750 million records worldwide with the Thriller album still the world’s best-selling recording of all time. His music continues to sell in its millions, winning new fans young and old alike. In February Thriller Live will overtake Jersey Boys as the 14th longest running show in the West End, and looks forward to celebrating its 4000th West End performance.

Featuring all the music from Michael Jackson's career from his earliest time in the Jackson 5, Thriller Live songs include I Want You Back, ABC, Can You Feel It, Off The Wall, The Way You Make Me Feel, Smooth Criminal, Beat It, Billie Jean, Dirty Diana, They Don’t Care About Us plus many more!

Get your Thriller Live tickets today for the ultimate tribute to the King of Pop!

"Quite literally thrilling" The Stage

"A total blast" What's On Stage

"A great tonic in these gloomy days" The Evening Standard

See it if You like Michael Jackson but don’t expect much more.

Don't see it if You like Michael Jackson and don’t want to be disappointed.

See it if you have no other show option

Don't see it if You are a die hard Motown fan

See it if you're a big fan of M Jackson

Don't see it if no story really, simple staging

Don't see it if you want a factual and real representation of his life.

See it if If you’re a Michael Jackson fan or appreciate he’s music it’s a must see! Sing along from start to finish

Don't see it if Your not a Michael Jackson fan

“The show has had a revamp...But this brief attempt at a narrative soon gives way to an avalanche of hits and some of Lloyd’s genuinely thrilling, dynamic choreography...’Thriller’ Live could quite easily have rested on its laurels and become a tired, stale shrine to a much loved star. As this recent reworking proves, the show is very much a malleable product, constantly upping its game and rightfully stalking its claim as the best party in the West End.”
Read more

“This is a sparkling, singing and shimmying conveyor belt of more than 30 of Jackson's greatest hits..What really hits home in this jubilant jukebox show is the range of repertoire available...The show, held together by the loosest of narratives, begins with a selection of Jackson 5 numbers. These earlier songs are among the best of the nigh...Some of these later songs are terrifyingly idiosyncratic and the lead vocalists struggle with the quirkier numbers...But it is the dancing that dazzles.”
Read more

“A glitzy concert of song and dance. It's true that the performers, and the great banks of LED screens, occasionally regale us with statistics about Jackson's amazing career...Within its narrow limits, the show works well. What most people like most about back-catalogue musicals is the medley of big hits at the end, and in this show the hits just keep on coming, largely glossing over the fact that in recent years Jackson has become ever less impressive as a pop star as he grows more bonkers."
Read more

“The show very sensibly shares out the performing duties among five lead singers – including a woman – who can all dance, and each of whom uses their particular vocal strengths to deliver all the songs the audience of devotees is expecting...‘Thriller Live’, as conceived by Grant, makes no attempt to string a narrative out of Jackson's career. All the fans want is to hear the songs and see the dances – and in this show, still going strong, that's exactly what they get.”
Read more

“This celebration of Jackson's music doesn't know whether it is...a ‘jukebox show’, a tribute or a superior form of karaoke. It's a mishmash, but the sort that rumbles along happily...Grant keeps the focus on the music. Save for brief segments of narration in the first half...the entire two hours and 40 minutes is comprised of hits, performed by an array of capable soloists...The show is a bit too overwhelmed by Jackson's achievement...It's a small price to pay, though.”
Read more