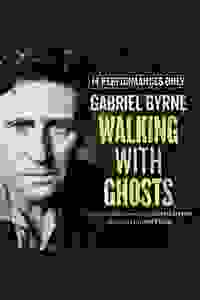 'Walking with Ghosts' follows Gabriel Byrne's life from growing up as a child who immersed himself in the world of imagination in Ireland, to finding commercial success as both a stage & screen actor in the United States. This solo piece serves as a poetic homage to the people and places that shaped Gabriel Byrne's fascinating life.

Gabriel Byrne is a critically acclaimed actor, director, producer, screenwriter, and author. He has received two Tony nominations for his work in the Broadway revivals of Eugene O'Neill's 'A Moon for the Misbegotten' and 'Long Day's Journey into Night'. He is also well-known for his portrayal of psychotherapist Dr. Paul Weston in the acclaimed HBO drama 'In Treatment', for which he won a Golden Globe Award.

'Walking with Ghosts' is directed by Emmy Award-winning director Lonny Price. He has worked on various Broadway musicals such as the 2000 production of Stephen Sondheim's Sweeney Todd with Patti LuPone and George Hearn, Leonard Bernstein's Candide with Kristin Chenoweth and Sir Thomas Allen, and Passion with Audra McDonald.

See it if you like one-person plays, memoirs, and simple but engagine storytelling.

Don't see it if you have a problem with alcoholism and abuse of minors being discussed. Read more

See it if You want to see a great actor live onstage, recounting his life story through poetic storytelling. Must-see if you're a fan of his work.

Don't see it if The topics of alcoholism or abuse of minors are triggering for you. Byrne also used an autocue for prompts which was distracting at times. Read more

See it if Charismatic narrator

Don't see it if No real revelations

"Byrne reveals himself as a writer with an eye for detail and the soul of a poet – and as an actor of considerable power and finesse. It's an understated night of theatre, but a rich one."
Read more

"It deserves to be: for all its ease of presentation, and very personal reflection on one actor’s life, it more than earns its place on the big stage, and lingers on, provoking thoughts and feelings long after the curtain drops."
Read more

"He’s shown a West End audience what we’ve been missing, a performer who can mix the light and the dark, the comic and searingly dramatic, with enormous skill, charisma and grace."
Read more