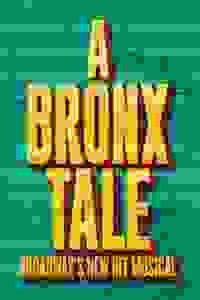 Based on Chazz Palminteri's solo show which inspired the 1993 film, this new musical is co-directed by two-time Oscar winner Robert De Niro and four-time Tony winner Jerry Zaks, with songs by Alan Menken.

See it if song good singing and dancing. Very poignant with good directing and staging. Has a good story to it, boy growing up in the Bronx. old time.

Don't see it if If you don't like a musical of this genre. It has touchy subject dealing with gangsters

See it if You want a good story that is well staged. I liked it more than I expected. Music is weakest part except one number. Acting was very good.

Don't see it if You need perfection or hated the movie. It's a nice show with solid moments.

Don't see it if You are looking for more depth in the story or the music.

72
You'd think that a combo of jersey boys + west side story would be a sure-fire combination, but you'd be wrong

Don't see it if "West Side Story" interracial dating plot is cliched, sentimentalizing dead mafia don is corny/unrealistic, in all meh nostalgic trip

See it if you want to take your bridge-and-tunnel friend to a Disneyfied, diluted, corny, unnecessarily-musicalized version of a much better film/play

Don't see it if you have any respect for the powerful storytelling of the original play/film. The flimsy score is completely incompatible w/the dark themes.

See it if You miss Jersey Boys or just want to see an average, upbeat American musical that you haven't seen yet and that you'll probably enjoy.

Don't see it if You'd be angry with a sanitized version of a good gangster story, an underwhelming score by Alan Menken, and generic musical staging.

See it if you want to see a great performance by Nick Cordero in a show with a pretty terrible book and some rather mediocre songs.

Don't see it if you like shows that tell their stories with at least an ounce of honesty. Every emotional plot point feels either unearned or rushed.

"It doesn’t break ground or dazzle with an unusual recipe, but it delivers reliable pleasures with polished professionalism and infectious energy...If there’s a secret ingredient that gives the musical version a zest, it is the wonderful score...Certainly not without its formulaic or sentimental aspects. Few mainstream musicals are. But it captures both the milieu it evokes and the colorful characters who populate it with a buoyancy and humor that ultimately won me over."
Read more

"There goes the neighborhood. Just when it was getting cool to go to a Broadway musical, along comes the lumbering and hackneyed 'A Bronx Tale'...A musically unmemorable mix of sappiness and contrived melodrama...Aside from Machiavelli-quoting mobster Bobby—played with expertly calibrated swagger by Nick Cordero—none of the characters command interest, and Alan Menken and Glenn Slater’s doo-wop–heavy score is far too lightweight for a plot that features murders."
Read more

"For all the craft and polish applied, this musical winds up right in the middle of the wrong place. It’s an unmoving target...Nothing rings true...The songs are all as professional and tuneful as you would expect from the team of Menken and Slater...They do perfectly well what songs are supposed to do in standard commercial musicals...But in doing so they normalize material that should not be normalized...That’s a shame; the musical is handsome and reasonably well performed."
Read more

"Because it resembles an urban fairy tale, Palminteri’s story works even better as a musical than it has in its earlier incarnations where its stereotypical aspects felt more glaring...'A Bronx Tale'—in the second half, packed with a succession of melodramatic incidents—can feel rushed and unconvincing...While the score doesn’t feature any breakout songs, it is tuneful and fun...Though hardly sophisticated entertainment, 'A Bronx Tale' has genuine charms."
Read more

"The streets revisited in this new production are paved with a heavy-handed and, in musical-theater terms, restrictive earnestness. There is humor and parental love, and a bit of romance; what’s missing is the even more essential element of joy...Palminteri’s book doesn’t dig into Sonny’s contradictions, and those who did catch the movie will anticipate the most clever and charming lines coming a mile away...Menken’s tunes don’t seduce as nimbly on a first listen as his best have."
Read more

"Credit director Jerry Zaks (and co-director Robert De Niro) with terrific casting...Let’s face it, this ill-advised musical version, with an anemic score by Alan Menken and Glenn Slater, isn’t going to send ’em dancing up the aisles. While there are fun things to be found, like those jailbait Doo-Wop Guys singing and snapping a cappella under the streetlight, the music is soggier than overcooked meatballs and the lyrics have absolutely no bite...Sergio Trujillo’s choreography is a snooze."
Read more

"It takes everything that was good about 'A Bronx Tale' and waters it down until it’s as tasteless as a fast-food milkshake...Not only does Mr. Thornton’s relentlessly tautological first-person narration tell you what you just saw and are about to see, but so do Glenn Slater’s flat lyrics, which start out unpromisingly and get no better. Alan Menken’s music is Disneyfied doo-wop with some ersatz Sinatra thrown in, the stuff TV commercials are made of."
Read more

"Some shows open on Broadway with nothing on their minds but a joyous desire to send the audience out humming, smiling and feeling just plain terrific. Such a show is the polished, familiar but freshly refurbished chestnut 'A Bronx Tale'…In its present incarnation, with take-home tunes, a first-rate cast and lively choreography, it clicks like a new Rolex…On the whole, 'A Bronx Tale' is a pleasant surprise guaranteed to send you through the exit doors smiling."
Read more