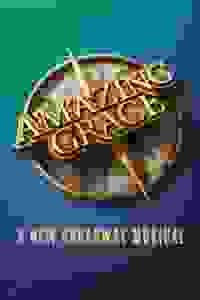 A musical of romance, rebellion, and redemption, based on the awe-inspiring true story behind the world's most beloved song.

John Newton, a willful and musically talented young Englishman, faces a future as uncertain as the turning tide. Coming of age as Britain sits atop an international empire of slavery, he finds himself torn between following in the footsteps of his father — a slave trader — and embracing the more compassionate views of his childhood sweetheart. But when a perilous voyage on the high seas finds John in his darkest hour, a transformative moment of self-reckoning inspires a blazing anthem of hope that will finally guide him home.

See it if this show is completely underrated. It has a stunning score and some of the very best voices on the broadway stage right now. Great story.

Don't see it if this show is poorly marketed. It's not the story of the song. It's a great story of slavery and redemption.

See it if You enjoy a soaring score with great vocalists and a story rooted in history.

Don't see it if You're looking for light fluffy fare

See it if you see everything on Bway. The story is horrible (slave trade), the characters unlikable, the music and lyrics lousy. Why go???

Don't see it if you have standards. The only good song is Amazing Grace, but its healing powers are unearned. I felt I was "lost" and I wasn't found. Read more

See it if You love historical musicals, no matter how weak the material.

Don't see it if You expect this to be a religious experience.

See it if you don't want to be the dummy who missed Erin Mackey's performance.

Don't see it if you're expecting too much. It's competent, but nothing more.

See it if you can forgive its weaknesses to see a timely story that reminds us how we brought the race issues and conflicts we see today on ourselves.

Don't see it if you can't look past its flaws (including that the protagonist's redemption comes so late in the show you already irrevocably hate him).

See it if you want to hear the song Amazing Grace (performed almost 2 hours and 20 minutes into the show).

Don't see it if you have the choice of seeing literally anything else or if you want catchy, memorable music.

Don't see it if you are hoping for the resonance the film had; they somehow didn't build the emotional significance throughout

"Unfortunately, while aspects of Newton’s tale are indeed noteworthy, maybe even amazing, the musical itself unfolds as an overstuffed history lesson trimmed in melodrama, with a standard-issue romantic subplot and some dutiful attempts to explore the lives of the slaves... 'Amazing Grace,' thick with such moralizing, naturally concludes on a note of uplift, or rather many notes of uplift: a choral singing of the title song... The song is simple, beautiful, immortal; the musical, not so much."
Read more

"Personally, I expect poetic license in the theater, but I expect it to serve a strong artistic or political vision. 'Amazing Grace' has neither. It comes out strongly against slavery; well done. But as with the recent, equally dismal, 'Doctor Zhivago', 'Grace' proves that folks are willing to burn piles of money trying to resurrect the 1980s-style megamusical. At best, the piece might move audiences to sympathetic tears, but in the end, it’s preaching to the choir."
Read more

"The equivalent of a child’s drawing: naïve, sincere, glowing with an unimpeachable if hard-to-pin-down vision of what it wants to be...It is also a confusing cartoon so lacking in craft that it ruins any chance of being taken seriously. Certainly it can’t be recommended as history; it’s riddled with falsehoods that alone would sink it. But it also fails as musical theater, on two counts: the music and the theater."
Read more

"There's no questioning the sincerity of 'Amazing Grace', which recounts the true story of the penitent slave trader who penned that popular hymn. However, while the tale of oppression and liberation ultimately climbs stirring peaks, it's symptomatic of the show's problems that its most vibrant and compelling character is a regal African mercenary who dishonors her ancestors through the heartless exploitation of her people."
Read more

"Lest you think that 'Amazing Grace' is one long celebration of the soul-stirring song, theatergoer beware. You’ll have to wait to hear those two little words—almost two and a half hours. The good news: It’s worth it...If only the rest of 'Amazing Grace' had such force. While by no means unpleasant, Smith’s songs are lifeless and forgettable."
Read more

"There’s an audience out there for 'Amazing Grace,' flawed as it is. Christian congregations and other faith-based groups should respond to this epic-scaled saga of how John Newton, an 18th-century British slave trader played by Josh Young, experienced a 'miraculous' religious conversion, became an Anglican minister, and went on to write 200 church hymns, including the stirring title piece. But ye of little faith will find it tough sledding."
Read more

"It’s not so much a musical as an antislavery pageant, with innocuous songs by Christopher Smith and a vertiginously high-minded book by Mr. Smith and Arthur Giron. ... Whatever its weaknesses, this is one of the best-looking musicals to reach New York in recent seasons...I can’t imagine that 'Amazing Grace' will last long on Broadway, but it’s a perfect fit for the drama departments of Christian high schools and colleges, where it will doubtless have a profitable afterlife."
Read more

"Epically bad show...If you’re going to make a musical about one of the best-known and most-loved songs of all time, you’d better be equal to the task. That, fundamentally, is not the case with this earnest but cringe-inducing freshman effort...Finally, however, we do get what we’ve paid for: that sinuous melody, those elegantly simple words. The closing scene is as powerful as it is predictable, as the hymn builds to its climax, sung by the entire company. Everything that has come before is instantly forgotten."
Read more