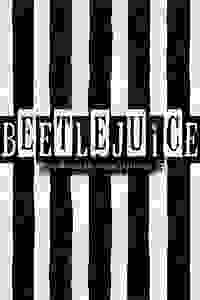 'Beetlejuice' tells the story of Lydia Deetz, a strange and unusual teenager whose whole life changes when she meets a recently deceased couple and a demon with a thing for stripes. Under its darkly comedic surface (six feet under, to be exact), it’s a touching show about family and love.

The musical opened on Broadway in 2019 and closed in 2020. It reopened in April, 2022 in a new Broadway house with Tony nominee Alex Brightman back in the title role.

The music and lyrics are by Australian composer Eddie Perfect and the book is by Scott Brown and Anthony King, the duo beind 'Gutenberg! The Musical!' Alex Timbers ('Moulin Rouge! The Musical') directs.

See it if You enjoy light-hearted fun, nice music, and great sets.

Don't see it if You are a stickler for the music. There is a lot of departure in order to make BJ the main character. Read more

See it if You want to have a good time at the theatre. I was surprised how much I enjoyed it. Kritzer is hilarious & really steals the show.

Don't see it if You are looking for something serious or for "high art". It's a silly show but lots of fun, it really won me over by the end.

See it if If you liked the movie and enjoy great sers and big productions.

Don't see it if Silly at times music was good, not great.

See it if You want a fun night out. Lots to look at without the special effects taking over. Great singing and acting. Great costumes/sets/lighting.

Don't see it if You’re a purist. They’ve changed the plot but in my opinion they’ve maintained the spirit of the film completely. Read more

See it if you would like to enjoy a new musical with a good story, a dedicated cast with good voices, on a great set, well-directed for two acts.

Don't see it if you would like to read your program before the start or during intermission as constantly flashing lights make it impossible. Tight seats!

Don't see it if You aren’t interested in a silly farce. Some cursing and light sexual humor. Good for teens & up.

Don't see it if realism is important to you. This thinly plotted show has only a suggestion of truth underlying the improbable actions of the characters.

See it if You like musicals, fan of the film or Some of the cast, enjoy delicious nonsense, like unexpected stage effects & plots of the supernatural

Don't see it if Don’t like to think about death, watch characters die violently, too much schtick, mediocre dancing, depictions of hell (no matter if funny)

"This show so overstuffs itself with gags, one-liners and visual diversions that you shut down from sensory overload...Brightman and 'Beetlejuice' can indeed sustain this anything-for-a-laugh intensity. And it is not a trait that benefits from prolonged exposure...Here, everybody, including every member of the support cast, has already gone so far over the top that there’s no room for comic contrast. The disheartening moral of 'Beetlejuice' is that when anything goes, nothing much registers."
Read more

"Whatever else it may or may not be, 'Beetlejuice' is spectacularly weird...there are magic tricks and giant worms and a starkly linear idea of the afterlife that contrasts well with the chaotic world of the living. If only so much of the rest of 'Beetlejuice' were not a busy mess...It looks great, and there are strong performances and some outré laughs, but none of it quite fits together; the tone varies wildly, and skids around on Eddie Perfect’s slipshod score."
Read more

"True to its source material, it’s loud, it’s cheeky, and it’s all about excess. It’s also—thanks in large part to Alex Brightman’s spot-on performance as the incorrigible titular ghoul—a pretty fun time...The truth is we’re not here for the sweet stuff; we’re here for the mayhem, and the show is at its best when the growling, grinning Brightman is onstage...The musical is supposed to have twin engines, Beetlejuice and Lydia, but only the first is fully firing."
Read more

"The show is a loving homage to a wonderfully weird original, reconceived for the stage with eye-popping design, full-throttle performances and a mischievous sense of fun...It's impossible to deny the virtuosic showmanship of lead actor Alex Brightman...The writers struggle to control the reins of their galloping narrative...The musical delivers a unique fan experience for lovers of the movie, and plenty of touches that Burton cultists will appreciate."
Read more

"Crafted from a group of creative minds who clearly love the source material...There are still second act problems and a song list void of any real bops, but it’s a fun time for the Burton novice and pure fan service for the Burton stans, thanks in large part to the titular puckish undead spirit breathing life into a Broadway experiment that could’ve been dead in the water...The real surprise standout is Kritzer’s Delia. A supporting role, yes, but one she blends with all kinds of comedy."
Read more

"The retooling done since its out-of-town tryout in D.C. gives the latest film-to-musical adaptation fresh snap, surprises and (gasp!) even heart. Sure, the narrative becomes a bit of a cluster-muck in the second act — but mostly it’s just screamingly good fun...The plotting eventually goes completely off the rails, but keeping things entertaining enough are the off-the-wall humor, endless visuals and aural delights, tuneful music and wicked lyrics of Perfect."
Read more

“This self-described ‘show about death’ bombards us with every piece of theatrical weaponry Timbers and numerous other imagineers could devise...Perfect’s score sounds like a simulacrum of Broadway show music, the cloth cut to fit each occasion, with rising modulations and drawn-out cadences simulating drama...The major impression, ultimately, is not that of a clever romp wickedly testing the limits of the tasteless, but of a repetitive refrain of disgust and disdain."
Read more

"The noisy musical...has arrived...like a garbage strike in Beirut...Aside from the usual cult followers, I suspect this horror will appeal mostly to pretentious grown-ups who discuss the psychological impact of Pee-wee Herman at cocktail parties at the MoMa....It left me with a headache no Excedrin can cure. Weird and macabre...sordid collection of gimmicks, sight gags and desperate jokes...I won’t bother to bore the uninitiated with the details of a plot, since there isn’t one.”
Read more