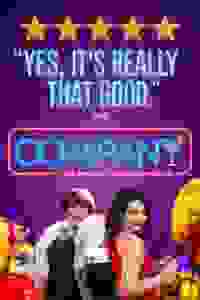 Sondheim's 1970 musical about marriage, love, and relationships gets a modern update in this gender-swapped revival. Bobbie’s turning 35 and all her friends keep asking when she will find the right man, settle down, and start a family. As Bobbie searches for answers, she discovers how figuring it all out in 21st-century New York could drive a person crazy.

The score includes many now-classic Sondheim songs, including 'Another Hundred People,' 'Getting Married Today,' and 'The Ladies Who Lunch.'

This production stars Katrina Lenk as Bobbie and features a cast of Broadway veterans as her married friends. Patti LuPone, Matt Doyle, and Jennifer Simard received Tony nominations for their performances in this revival, as did the revival itself, and director Marianne Elliott.

See it if Great acting. Sets, costumes and singing. Lupone kills it

See it if you enjoy the songs, want to laugh, love NYC - all performed by a wonderful cast on a great set, well lit, with a superb orchestra.

Don't see it if you would not enjoy an updated version of this musical.

See it if A Sondheim classic. Some muddle themes, but stellar performances. It's a must-see.

Don't see it if You prefer a traditional plot. This is more slice of life character study.

See it if a whole evening of show stopping numbers by fabulous stars is enough to keep you interested.

Don't see it if the gender switch male to female of the protagonist makes the plot too conventional. Its also too much of a good thing; I left exhausted.

See it if you're a Sondheim fan, like this musical, fan of Lupone & Lenk, curious how gender change works, see Matt Doyle do Not Getting Married

Don't see it if you're not a Sondheim fan, want stronger plots in musicals, not a Lupone fan, not interested in play about marriage

See it if you are a fan of Stephen Sondheim or of this show. I love this version of a female Bobbie. It works very well. Great singing and acting.

Don't see it if you don't like talk of marriages that don't work or only want to see a traditional version of Company or you are not a fan of Sondheim. Read more

See it if You’d love a musical with a well-drawn adult story and entertaining/interesting characters. This is Golden Age Broadway updated for today.

Don't see it if You want a family-friendly show or are single and don’t want to be depressed by a story about being a single woman in NYC.

See it if you're a fan of Sondheim, Marianne Elliott's direction, or Bunny Christie's sets (there are Curious Incident vibes in the exquisite sets).

Don't see it if you're expecting to be blown away by "Being Alive." Katrina Lenk doesn't have the voice to pull it off the way it could (should?) be. Read more

"In that sense, this “Company” is perfectly in line with his intentions: It’s new. And truth be told, I was never less than riveted — if usually in the way Bobby is, eyeballing messy marriages. Nor is the chance to hear the great score live with a 14-piece orchestra to be taken lightly; is there a more exciting opening number than the title song? So I guess I’m sorry-grateful. Sorry for not liking this version of “Company” better — and grateful to Sondheim for providing the chance to find out."
Read more

"Marianne Elliott’s production pulls these complex elements together with dazzling success. When it comes to favorite Sondheim shows, I have never been a Company man...But this production has brought me around. In fact—setting Gypsy and West Side Story aside, since Sondheim only wrote their lyrics—I will say this: I think Elliott’s Company is the most satisfying Broadway revival of a Sondheim show in history."
Read more

"A year and a half later, the revival resurfaces as a rejuvenated triumph, mounted with insights both touching and stinging, and a canny understanding of the complicated mechanics of a show that takes place largely in the abstract. Elliott brings a pleasingly light touch as she guides an ensemble of top-notch New York stage regulars to hit every note of comedy and poignancy."
Read more

"It’s silly and sophisticated, intimate and in-tune with the currents of modern life, brilliantly conceived and funny as hell. “Company” is the best of what Broadway has to offer adult theatergoers: a playful slap, an honest tickle and one of the 20th century’s greatest musicals gorgeously realized — and refined — to reflect the moment."
Read more

"'Company' is the most sophisticated fun I’ve had in a theater in ages...Is anything gained with this tinkering? A tremendous amount. By showing husbands as stay-home dads, or men not sticking to gender scripts (after he peels off Bobbie’s red pantsuit in bed, sensitive Andy pauses to compliment her style), by dramatizing how gay marriage can induce waves of assimilation panic, by allowing women to be as casual about sex and settling down as men, Elliott & Co show how our social selves are queerer, fairer, more feminist, and less monolithic than ever before. It’s really there in Furth’s humane, quirky book and Sondheim’s dazzling score; the pronouns just needed shaking up."
Read more

"This gorgeous revival of the Sondheim-George Furth masterwork at the Bernard B. Jacobs Theatre, is, from across-the-board excellent performances and thoughtful revisions to the visual delight of a lovely and ingeniously clever set design, a gift both to and from the genius we lost last month...With its attention-getting gender-switching premise bringing a freshness and nuance that’s nothing short of near-miraculous for a much-revived 51-year-old musical, Elliott’s Company challenges Broadway’s current production of 1955’s Trouble in Mind as the most dizzying time-warp experience on stage this season. Like that Alice Childress play, this Company feels both absolutely of the moment and timeless."
Read more

"The highs are so high in director Marianne Elliott’s gender-reversed “Company” that a Sondheim freak like me can live with aspects that don’t quite hit those lofty heights. We’ll get to those, but first, let’s dwell for a spell on the joys of a Broadway revival that had its official opening Thursday at the Bernard B. Jacobs Theatre — pleasures that make this production a moving, and deeply funny, living memorial to the late Stephen Sondheim."
Read more

"Finally, a smart, funny, human revival about the highs and lows of being alive that actually feels alive. It helps that the show by Stephen Sondheim, who died last month, is the best musical about New York City ever written...No other show understands the callused skin that hardened, cynical New Yorkers develop to make it through another miserable day quite like “Company” does. Sondheim’s musical, splendidly directed by Marianne Elliott, is a paean to NYC about the pains of living in NYC."
Read more