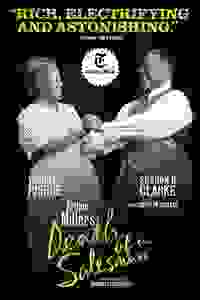 Death of A Salesman (Broadway) NYC Reviews and Tickets

A revival of Arthur Miller's classic play, told from the perspective of a Black family.

Set in the late 1940s, 'Death of a Salesman' follows traveling salesman Willy Loman as he slowly unravels. The play explores the complicated family relationship between Willy, his wife, Linda, and their adult sons, Biff and Happy.

In this Pulitzer Prize and Tony-winning drama, playwright Arthur Miller examines how far one man will go to provide for his family and achieve the American dream.

Following a critically lauded run in London, this revolutionary revival told from the point of view of an African American family will run on Broadway for 17 weeks only. Olivier Award nominee Wendell Pierce​ and Olivier Award winner and 2022 Tony® nominee Sharon D Clarke reprise their roles as Willy and Linda Loman with additional performances by André De Shields and Khris Davis.

See it if You want to experience one of those magic nights of theatre when EVERYTHING goes perfectly. Exquisite acting of this classic freshly seen.

Don't see it if If you’re a racist or if you just can’t sit still for three hours. Read more

See it if you enjoy good acting in deep drama as relevant today as when it was written. A little bit of music/singing, new staging and good lighting.

Don't see it if you do not like long, two-act plays full of conflict among family members derived from life's harshness.

See it if Classic story with a excellent cast.

See it if you’ve never seen a production of this play before. It’s central to the American theatre canon and should be seen at least once.

Don't see it if you have trouble sitting through long shows or need to find characters likable. This is watching a self-centered, broken man for 3 hours.

See it if You like important plays & want to see a current, updated casting & meaning of the play. The cast is great, standouts are Pierce and Clarke

Don't see it if U cannot sit through 3 hour plays & discord is not what you want for evening entertainment. Andrea de Shields scared the hell out of me.

See it if You love the play and want to see a fresh new take on an old classic. They definitely made it their own

Don't see it if You are expecting it to be exactly like the original. Read more

Don't see it if If you prefer a light topic then skip this one.

See it if I loved every aspect of this play ! The casting is perfect as is the acting and directing ! The dialogue fit so brilliantly to the action !

Don't see it if No reason not to see this, absolutely NONE ! See it, you won’t be disappointed ! I have never seen a better production of this play !

"The latest Broadway revival, which opened on Sunday at the Hudson Theater, goes wider, a notably rich and mostly successful approach."
Read more

It is not only the casting of the striving Lomans as a Black family that makes this Salesman a departure. It is also that the director, Miranda Cromwell, has rendered much of the play as a dissonant fever dream."
Read more

"Maybe the enduring message of this production is that these themes are universal, that we all suffer the same under the yolk of The American Dream. And that, in spite of the odds, we all aspire to be great."
Read more

"There’s no doubt that casting a Black actor as Willy Loman (for the first time on Broadway, no less) adds a deeper dimension to this monumental role."
Read more

"Ms. Cromwell’s production is, nonetheless, emotionally wrenching as it digs fiercely into the heart of the play."
Read more

"The script is unchanged – and surprisingly accommodating to the fresh point of view...infusing the production with a legacy and identity all its own."
Read more

"The mournful irony Miller built into 'Death of a Salesman' is especially potent now, when our world so often feels as if it’s hanging by a thread. "
Read more

"The climactic fight all the way to the inevitable conclusion is not affectingly tragic, and there is no build to speak of. Nice songs, but not enough attention was paid to the basics."
Read more