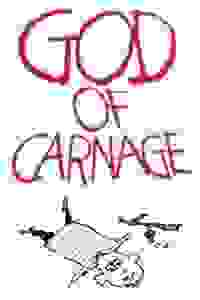 The story of two couples who meet to attempt to discuss how to handle the fight their sons got into, that quickly devolves into a full-on brawl of its own.

Set in present-day New York City, 'God of Carnage' is the story of two married couples who meet shortly after their respective sons have a nasty schoolyard tangle. Michael and Veronica, whose son’s teeth were knocked out with a stick, invite Alan and Annette, whose son did the knocking, to their home to settle matters. But any attempt at having a civilized discussion about whose child is responsible for the fight, and how the parents may have influenced such destructive behavior, quickly devolves into finger-pointing, name-calling, stomping around and throwing things.

See it if You like small cast, sharp-witted, short plays.

Don't see it if You're not interested in seeing four rich people yap about their kids for 90 minutes.

See it if you want to see a fast paced show with famous actors.

See it if Terrific play with a strong message. How far will we go to "support" our kids? The original cast was just amazing.

Don't see it if There was a vomiting scene that was too realistic for my taste. I found myself gagging while watching it. I had to look away.

See it if you think modern parenting is a farce

Don't see it if you have a sensitive gag reflex

See it if I saw all "3" casts, but of course the Gandolfini-lead quartet that opened the show were the best, mainly cause they helped adapt the story?

Don't see it if Don't see it if U don't like adults behaving badly. Also there is a brief vomiting scene that weak stomachs may want to skip. Non-parents??

See it if You like theatre that keeps you on the edge of your seat.

Don't see it if You like very traditional plays.

See it if You are a fan of sharp, witty, well-drawn characters having at each other for the entire show. It's Funny, insightful, surprising.

Don't see it if The above don’t appeal to you.