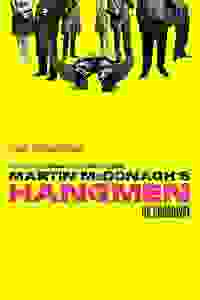 The time? 1965. The place? England. Britain’s (second most) famous executioner has to figure out what to do now that hanging has been abolished. Olivier and Academy Award-winner Martin McDonagh ('Three Billboards Outside Ebbing, Missouri,' 'The Pillowman') is back with his seventh dark comedy.

'Hangmen' returns to Broadway after sold out engagements in London and the Atlantic Theater Company, and a first round of previews on Broadway prior to the pandemic

'Hangment' has been nominated for five Tony Awards, including Best Play and acting nominations for David Threlfall, who plays Harry, the second most famous hangman, and Alfie Allen, who plays a mysterious stranger who shows up at Harry's pub.

See it if Great acting. Some great scenes. Good staging.

Don't see it if If you have a hard time understanding thick accents. Don’t have the patience to sit through some of slower parts.

See it if you like a very dark comedy drama with some twists. The acting is very good but the words are very hard to understand due to dialect.

Don't see it if you don't like to see violence on stage or discussions about hanging. Read more

See it if dark British humor to show the horrors of capital punishment, psychological drama in showing human's reaction to it; McDonagh's writing;*

Don't see it if laughter in a play about a terrible subject, hard to understand British accents (especially in beginning and by a couple of characters) Read more

See it if This is better than the Atlantic Theater- cast changes really work. Alfie Allen is pure menace. Mcdonagh always delivers.

Don't see it if Its static. Most of the "action" is described not acted. Some familiarity with the subject is useful. Again accents come into play.

See it if a funny show about crime and death. a real ensemble piece. feels stronger than the prior Atlantic production. well acted.

Don't see it if don't like Martin McDonagh. A dark (dark) comedy that many don't "get"

See it if A man was unfairly hung starts this amazing play. I could not find one negative in this well acted, directed & set designed play. Bravo

Don't see it if If you like musicals, this is not your play.

See it if Wonderful show , great storyline, well acted however the accents were a bit difficult to understand in the beginning of the play.

"Four years later, the world feels coarser — perhaps it always does — and not just because death has become much more visible in streets and wards and wars. So has people’s indifference to it, and to all kinds of suffering and unfairness. McDonagh’s cynicism feels closer to our own, or rather we to it. 'Hangmen' now plays less like a clever exercise and more like news, with an unnerving headline."
Read more

"The play’s convictions seem simple: Capital punishment is bad. We’re certainly not in favor of serial murderers. But the play is also making a deeper critique of comedy here — particularly the vicious humor McDonagh is so good at. Everything bad under the sun was done to amuse the boys down at the pub; McDonagh shows us how a snickering impulse can end in pain and injustice and death."
Read more

"the cheerful brutality of [McDonagh's] work can sometimes betray a certain emptiness at the core; what are the stakes, when even a fatal miscarriage of justice is played for punchlines? Hangmen suffers from some of that dissonance, and its longer, talkier interludes serve more as amiable time fillers than story engine. But there's real pathos in between the lines and endless pints of lager — even maybe a little heart. "
Read more

"Mr. McDonagh has not sanded down the serrated-knife edges of his comedy. Even when the play’s tone darkens, the regulars at the pub Harry now runs continue to dole out generous doses of humor. Mr. McDonagh is incapable of writing a dull character or a flaccid line of dialogue, and 'Hangmen' is peopled with a savory array of misfits and idlers propping up Harry’s bar, drawn in bold but never garish comic colors, unwittingly dispensing wit."
Read more

"it’s clear that, after deciding to write about the end of hanging in England circa 1965, McDonagh went straight to those masters of subversive black comedy (plus the lesser-known David Mercer) and never looked back."
Read more

"With a sure eye for finding the laughs and the shocks in McDonagh’s universe, director Dunster and his cast inhabit this little corner of the world with total conviction, conveying the larger implications – safe to say Harry’s resolute convictions about guilt, justice and the unshakeable rightness of his life’s work aren’t the mere personal quirks of an isolated individual – while maintaining the specificity of a seemingly safe little cocoon where everybody knows your name, if not your secrets."
Read more

"McDonagh, who has had enough success not to have to answer to anybody, is having fun saying things few in the theater even dare to whisper these days, of course, and that will delight those who don’t look for moral earnestness or a neatly tied thematic bow to accompany their precious nights out on Broadway."
Read more

"McDonagh fans will be delighted. The playwright gives his executioner and unhinged pervy weirdo the same sympathetic, funny treatment he gave a Northern Irish terrorist in the also teriffic 'The Lieutenant of Inishmore.' In fact, this is his finest play since that one, 16 years ago."
Read more