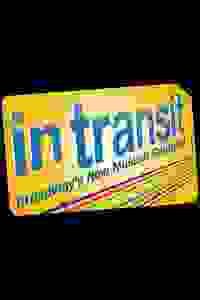 In Transit NYC Reviews and Tickets

This all-a cappella musical celebrates the wide variety of commuters in the city that never sleeps…or stands still. Featuring songs by the co-composer of 'Frozen.'

Inspired by the vibrant rhythms of life on the subway, 'In Transit' follows the intertwining lives of 11 New Yorkers, all hoping to catch the express train to success, love, and happiness—and the stops they make along the way. With a book, music, and lyrics by Academy Award winner Kristen Anderson-Lopez ('Frozen'), James-Allen Ford, Russ Kaplan, and Sara Wordsworth, and vocal arrangements by Deke Sharon ('Pitch Perfect'), 'In Transit' is directed and choreographed by three-time Tony Award winner Kathleen Marshall ('Anything Goes,' 'Nice Work If You Can Get It'). Inspired by an earlier incarnation of 'In Transit,' which played Off-Broadway in 2010.

See it if You want to see a surprisingly topical, relevant show. Uplifting and inspiring.

Don't see it if You're not willing to give acapella a try. I thought I'd miss the orchestra but it was very clever how they handle the music.

See it if Hello NYC! About time a play takes place in NYC subway! Great dancing, story so-so, but good acting. A Lot of heart!

Don't see it if You don't like a piece like this, raw, edgy. Story line may make some uncomfortable.

Don't see it if You are looking for more drama, depth or subtlety. It's pleasing but a bit shallow with a tidy ending. The a cappella is excellent.

See it if you have ever taken a subway. NYC in jokes & details, astounding vocal work. touching characters a set that is practically another character

Don't see it if you hate musicals although this one is very appealing.

Don't see it if Do not ride the subway

See it if You'd love an upbeat a capella musical, sung by a glorious cast, no matter the plot.

Don't see it if You're looking for something revolutionary or hip, like Pitch Perfect. The storyline is generic, at best.

Don't see it if you don't like to see shows with the most rudimentary character development, tired plots and not a single ounce of honesty.

See it if you want to see a musical run of steam during the first 5-10 minutes.

Don't see it if you have better options, which I am sure you all have.

"Every now and then, as yet another peppy cliché prances across the stage, you may pause to ponder the pioneering achievement of 'In Transit'...Acknowledging this is rather like admiring the ingenuity that must have gone into a sentimental picture of a rainbow...The likable, hard-working cast does achieve marvels of vocal synchronicity...But the Broadway-style belters’ voices, which are abrasively amplified, are often at odds with the aural smoothness of a cappella."
Read more

"This Broadway iteration, sprucely directed and choreographed by Kathleen Marshall and with a charming ensemble, better showcases the book and score. But the central problem remains: harmonic overload. If you listen to Pentatonix on repeat and own the box set of 'Glee,' you might spend 100 minutes in bliss. The rest of us will grow tired of numbers that sound like ’70s sitcom theme songs or advertising jingles. This is where I get off."
Read more

"'In Transit' is less a musical than a collection of unrelated clichés strung together in the manner of a themed revue. All the expected touchstones, from Dr. Zizmor to Pizza Rat, are here...But the larger problem is that the theme with which the authors try to elevate the material is so baggy and banal...The a cappella element is a great deal more successful, even if it’s just as random...I can’t square the musical sophistication of 'In Transit' with its narrative hackwork."
Read more

"'In Transit,' while boasting engaging performances, features cliched characters and situations too bland for a sitcom, let alone theater...The bouncy score has been ingeniously arranged by Deke Sharon, who performed similar chores on the two 'Pitch Perfect' movies. Its pleasures, however, are somewhat negated by the overly heavy amplification, which rivals that of a rock concert...Other than the undeniably impressive vocal performances, the show is mostly forgettable."
Read more

"Ultimately, it’s the talented cast that makes this a pleasant commute...The a cappella trope wore on me by the end. Seibert and Mackey each had big final numbers they could undoubtedly nail, but they fell a little flat when backed by oohs and ahs. Perhaps the songs deserved a more soaring composition. 'In Transit' arrives at its Broadway station safely and soundly, but misses the emotional connection needed to make it an express hit."
Read more

"A charming a cappella musical of metropolitan life that’s rapturously harmonious...What gives 'In Transit' its new swipe is what’s not there—the orchestra—and what is—glorious, pitch-perfect voices, set to Deke Sharon’s rich and expressive arrangements...The book is by-the-numbers, with the audience’s minds moving ahead of the plot faster than a scurrying subway rodent. All the performers bring a high degree of likability to otherwise plaintive roles...It’s a surprisingly moving experience."
Read more

"The pop-song score is so watery and texturally unvaried that the initial charm of seeing an a cappella show wears off long before 'In Transit' winds to a close…As for the book, it’s straight from the recycling center, a rickety assemblage of spare parts in which no one utters an unforeseeable word…Everyone in the cast is good, but they, too, are saddled with material so lacking in distinction that they fail to make the strong impressions they would surely make in a better show "
Read more

"A mediocre show that is selling itself as Broadway’s first a cappella musical...The songs are as generic as those descriptions suggest, and — notwithstanding the efforts of the talented ensemble — nothing in Marshall’s uninspired staging on Donyale Werle’s sanitized subway station set makes them of even passing interest while, say, waiting for the train. It’s hard to imagine how this show made it to Broadway, but I suspect it will be on the express train to the next station."
Read more