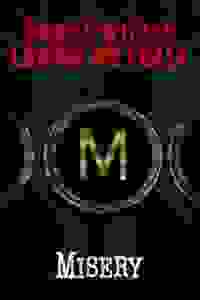 Successful romance novelist Paul Sheldon (Willis) is rescued from a car crash by his 'Number One Fan,' Annie Wilkes (Metcalf), and wakes up captive in her secluded home. While Paul is convalescing, Annie reads the manuscript to his newest novel and becomes enraged when she discovers the author has killed off her favorite character, Misery Chastain. Annie forces Paul to write a new novel, and he quickly realizes Annie has no intention of letting him go anywhere. The irate Annie has Paul writing as if his life depends on it, and if he does not make her deadline, it will.

See it if Great performance by Metcalf. Good story. It is campier than it is suspenseful, but it works in that way. Enjoyable.

Don't see it if you expect thrill and angst of the movie or the book.

See it if You're looking for a fun night out. This is an entertaining show with an excellent performance by Laurie Metcalf.

Don't see it if You are looking to be scared. While there are a couple of tense moments, this show plays more for the laughs than the scares.

See it if If you like Laura Metcalf, a good stage actor. If you liked the movie story line.

Don't see it if Bad directing, slow, Willis not effective at all. If you like a good movie in which the play resembled nothing like it.

See it if You love Laurie Metcalf and would watch her act her way out of a paper bag.

Don't see it if You're looking for a play on equal par to the film.

See it if you like Laurie Metcalf (she's terrific, as usual).

Don't see it if you like Bruce Willis (if you do like him, you'll be HUGELY disappointed with his performance).

See it if you like a thriller; you aren't expecting much from Bruce Willis; you don't want to be the dummy who missed Laurie Metcalf's performance!

Don't see it if great acting doesn't interest you.

See it if You're familiar with the movie. You're a fan of Laurie Metcalf & Bruce Willis. You like the audience to be involved. You enjoy camp.

See it if A great female stage actress drag around a male movie star. Bruce just can't keep up with her. But her performance is always worth seeing

Don't see it if if you want to see a show that should be done is a small theater. Kathy Bates was great in the movie, Laurie Metcalf is amazing.

"'Misery' the play is saturated in what feels like an amused, nostalgic distance from its source material. It’s as if Mr. Willis and Ms. Metcalf had shown up at the behest of a 'Misery' fan club to share memories of our enjoyment of the book and movie and to chuckle over how they once scared the wits out of us. Even the requisite dark-and-stormy atmospherics register as gentle, teasing reminders of guilty thrills past."
Read more

"On a meta level, 'Misery' is about Willis playing film star Willis being terrorized by Metcalf’s superior acting talent…The pleasures of this production (perfunctorily staged by Will Frears) are mostly visual and all predictable…William Goldman’s stage adaptation of his own screenplay is lazily faithful to his own work…Still, if life imitates art, by the end of 'Misery’s' run, Willis may have learned something about acting from Metcalf. The rest of us just paid to watch the class."
Read more

"What this production mostly demonstrates is the futility of digging up the dead…The movie, with its variety of shots and its focus on details, could disguise that endless tick-tock, but onstage the drama flattens out and separates...Willis has no stage chops…Metcalf knows exactly how to engage the audience...The genre [of suspense] has become so marginalized that it’s finally fallen off the page altogether, landing in a puddle of camp."
Read more

"This 'Misery' is an enjoyable enough rerun that recaptures some of its predecessor's B-movie pleasures...The play works surprisingly well in its more Hitchcockian scenes…As far as unhinged stalkers go, Metcalf's Annie is a hoot...It's just too bad nothing else in this rote retread comes close to the unpredictable energy of Annie's almighty insanity."
Read more

"Luckily, director Will Frears and stars Bruce Willis and Laurie Metcalf are all in synch with the plot’s lack of serious intent…Though the technical specs are excellent, the production suffers from a curious lack of tension. And, moreover, fun…Willis plays Paul with a flatness and passivity that feels too inert, even for a character who is bedbound. And as Annie, Laurie Metcalf is overly conscious of not echoing the line readings as they were delivered by Bates."
Read more

"Will Frears lets Willis get away with murder by maintaining his sophisticated-author cool well beyond the point of believability…Metcalf skillfully modulates her emotional transitions from adoring to obsessive to psychotic. Her eyelids flutter, her hand gestures quicken, and her vocal range reaches for the high notes. It’s a stunning performance, even if, in this oddly fear-free production, she provokes more pity than terror."
Read more

"'Misery' has nothing to offer save for the chance to get Mr. Willis’s autograph after the show…As scary as a lukewarm cup of Nesquik. Two big things are wrong with it: Mr. Willis never seems even slightly frightened, and Ms. Metcalf isn’t pitiful…As a result, you can’t feel sorry for her, which means that you don’t buy her…Will Frears, the director, fails to stage its gaspworthy moments with sufficient punch, though it’s not fair to blame him for the failure of a staging that is so ineptly cast."
Read more

"If you can put aside the fact that the show offers about five seconds of actual, thriller-type suspense during its 90 intermissionless minutes, you can see glimpses of a younger and extremely likable Willis in 'Misery'...This script just smacks of laziness...What does surprise is that director Will Frears seems to have demanded so little not only of his stars but of most of the production team...What this is, is a summer stock production?"
Read more