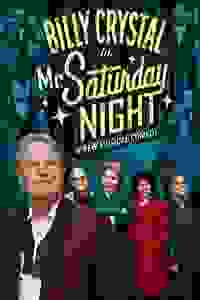 Billy Crystal co-writes and stars in this brand-new musical comedy premiering on Broadway.

In this musical based on Billy Crystal's 1992 movie, Buddy Young Jr. is an outrageous and outspoken comedian who found fame, if not fortune, in the early days of television. Now, about four decades later, he seeks one more shot at the spotlight and, while he’s at it, one last shot at fixing the family he fractured along the way. Featuring music by 3x Tony winner Jason Robert Brown, lyrics by Tony nominee Amanda Green, and direction by Tony winner John Rando.

The new musical was nominated for 5 Tony Awards, including Best Musical, Best Book of a Musical, and Best Original Score. Crystal and Bean were also nominated for their performances.

See it if If you like Billy Crystal. Borscht belt humor.

Don't see it if Dated May not be great for everyone

See it if Just go see it for a nice and fun show Critically, it's no masterwork, but for a great night out. It's Billy Crystal for goodness sake...

Don't see it if You don't like fluffy musicals. This is the definition of fluff.

See it if you want to see Billy Crystal deliver jokes in the grand old style.

Don't see it if you are looking for innovation or originality. The point here is comforting familiarity.

See it if You appreciate Billy crystal and good old fashioned comedy.

Don't see it if You want a first rate musical. The music is unnecessary in this show.

See it if you love a great story,, characters, performances, and would love to enjoy Billy Crystal singing well/connecting to the audience superbly.

Don't see it if you hate humor, because this show has a TON of it. This was a wonderful time at the theater. Read more

See it if enjoy Billy Crystal, who works really hard. Old-timer looking back on his life.

Don't see it if want a big show. Seems to need more people. Score is disappointing but attributed to Billy not really a singer.

See it if you like Billy Crystal. He is a unique and wonderful entertainer.

Don't see it if you expect a deep and nuanced show. This one is all about the jokes and the shtick.

83
Would work best as a straight, non-musical comedy, Forgettable music/lyrics, Mild raunchiness, but mostly funny, Dated and one-note in many parts, Entertaining

See it if you absolutely must check “seeing Billy Crystal live, on Broadway” off your “To Do” List; want an acceptable, entertaining night of theatre.

Don't see it if expecting something new, surprising, or chock-full of amazing music and songs. If you’re not a fan of dated, childish humor, go elsewhere. Read more

"As a piece of theater, the show is a bit of a mess; the jokes, even some of the hoary ones, work better than the storytelling, and the acting styles are all over the place. Still, it makes for a diverting evening — because it will almost surely make you laugh, and because of how acutely tuned into the audience Crystal is."
Read more

"By Broadway standards, 'Mr. Saturday' is a modest little show. ... Everything about it is resolutely old-fashioned—in some ways it’s a celebration of oldness itself—and it's not long on drama. (We don't even get to see the big flashback meltdown scene.) But it delivers exactly what it promises: Crystal, completely in his element, with a crowd that is more than happy to buy what he’s selling."
Read more

"The book by Crystal, Lowell Ganz, and Babaloo Mandel (the original film’s authors) and particularly the new music by Jason Robert Brown feel flabby and thin in this new environment. ... So why did I enjoy it so much? When the show isn’t trying to be a musical, it puts Crystal up in front of us and has him do Buddy’s act. Crystal is the kind of entertainer whose blade never dulls."
Read more

"The structure of the musical is nicely roomy, giving Crystal ample time to perform standup, sell jokes, and serve up his shtick. It works!"
Read more

"Overall, Mr. Saturday Night is a fun time, but it also feels like it's missing the spark that would make it memorable. Perhaps the show would work better as a 90-minute musical, or even as a play focused on Buddy's comedy routines, which are its high points thanks to Crystal's comedic timing and showmanship."
Read more

"It’s the kind of show where verisimilitude is not the goal. It knows what it is: A great comic vehicle with a solid-though-unsurprising story — with a little love, if not schmaltz, thrown in for good measure."
Read more

"You’ll be relieved to know Billy Crystal is still a stand-up guy — stand-up in the sense that the jokes in 'Mr. Saturday Night,' the 1992 film comedy he and other showbiz pros have turned into a slender but agreeable Broadway musical — are old-school funny, polished and impeccably timed."
Read more