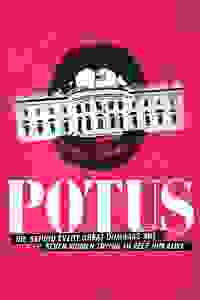 Selina Fillinger’s play was a 2019 selection for The Kilroys’ List. Five-time Tony Award winner Susan Stroman directs the all-star production, which also features Lilli Cooper, Lea DeLaria, Julianne Hough, and Suzy Nakamura. The modern farce is about the women the President relies on to keep him out of trouble.

This is Fillinger's Broadway debut. Her only prior play in New York was 'Something Clean' at Roundabout Underground. It is also Stroman's first time directing a straight play (non-musical) on Broadway.

White and Dratch were both nominated for Tonys for their performances, as was the revolving set by Beowulf Boritt.

See it if you like fun and clever comedy. Expertly acted with perfect timing. Great story arc with opportunities for all actors to shine. FUN!

Don't see it if comedies are not your thing.

See it if You want a great night out and want to laugh. Excellent cast. Extremely funny and fast past. Finally something FUN on Broadway this season.

Don't see it if If you aren’t in the mood to laugh.

See it if You enjoy sharp, smart, funny plays with all star casts at the top of their game delivering a relevant political message disguised as farce.

Don't see it if You can’t handle vulgar language or if you are a misogynist. This is all women and definitely told from their perspective. Read more

See it if You want a clever, funny show with good acting.

Don't see it if Your not political or if presidents wives are not your thing.

See it if From joke one the laughs keep flying. A delightful and surpisingly quick show that works.

Don't see it if You don't like political humor.

See it if Crazed explosion of feminist satire. Wildly cheering audience. Amazing acting with perfect comic timing. Every character is a blast.

See it if You enjoy farce-like comedies, are a fan of many of the cast members, enjoy political comedies, can make fun of a certain former POTUS

Don't see it if Do not enjoy slapstick or the occasional unbelievable scenario, are unimpressed by controlled chaos, don’t like questionable language

See it if you like an over the top comedy about the support of women for a weak president. Great casting and staging. Really funny

Don't see it if you like sophisticated comedy or don't like language and crude talk of certain body parts. Read more

"As a farce, 'POTUS' still plays by old and almost definitionally male rules; farce is built on tropes of domination and violence. On the other hand, and more happily, 'POTUS' lets us experience the double-bind of exceptional women unmediated by the men who depend on their complicity."
Read more

"'POTUS' works overall: It just wants to be funny, and it is, and that’s a pleasure. Today's body politic is riddled with sores. I can’t say for certain that laughter is the best medicine for that, but it sure is a welcome palliative."
Read more

"Fillinger’s whizbang comedy is not perfect. Its characterization slews crazily around; its grip on gross-out humor is a little loose. ... Still, 'POTUS' makes its many effective jokes with its jaw cocked. Every now and then a woman will marvel at another woman’s brilliance and ask, 'So why isn’t she president?' Darn tootin’."
Read more

"Performances are key in 'POTUS' and the cast, under the direction of Susan Stroman, exceeds expectations. They deliver their lines nimbly, which keeps the play agile and appropriately tense. White, with her screeching, nervous pacing, wide eyes and gesticulating arms, complements Nakamura’s intentionally stiff stance and staccato cadences. Their realization and brainstorming sessions hit the right mix of comical and stressful."
Read more

"POTUS is a farce. Full stop. The likelihood that you will laugh until your face hurts is one of near certainty. But that doesn't mean the play doesn't still have something compelling to say amidst the unstoppable hilarity punctuated by artful spews of profanity."
Read more

"If 'POTUS,' directed by Susan Stroman and opening today at Broadway’s Shubert Theatre, never quite rises to the level of those three influences – not as darkly clever as 'VEEP,' as lightning quick as 'Noises Off' nor as go-for-deliriously-broke as Ludlam – 'POTUS' barrels through its weaker stretches on the contagious enthusiasm and in-it-together vivacity of a crowd-pleasing cast."
Read more

"Every player, in fact, gets funny moments: The laughs are doled out so judiciously that the actors’ contracts may have been drawn up with the equal protection clause in mind."
Read more

"What will appeal to some of about Fillinger’s play — but what also holds it back — is that it’s cranked up to about an 11 from the second the lights go up. The best farces, as well as sit-coms, start with some serene normalcy before everything goes haywire. How can we perceive this world falling apart, and laugh uncontrollably, if we never see it put together?"
Read more