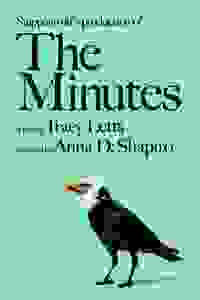 The City Council meeting in the fictional Midwestern town of Big Cherry is in session. Over the course of one long meeting, the airing of town issues reveal something deeper: lies, complicity and corruption that very much mirror the political moment for the country as a whole.

'The Minutes' was nominated for a 2022 Tony for Best Play. Letts won a Tony and a Pulitzer for his 2007 play 'August: Osage County.'

See it if Tracy Letts in this show like man from Nebraska is uneven here. The writing and directing misses.

Don't see it if If you want a well written play this is not it.

See it if you like plays that reflect small town politics and issues of the day. Some good humor, important messages, good acting and direction.

Don't see it if you want to hear everything-the dialogue goes on after humor that the audience is still laughing at so you miss what is being said (con't..) Read more

See it if Surprisingly sharp. Fascinating premise. I was captivated throughout.

Don't see it if You don't like shock value or multi-layered shows.

See it if you have experienced small town politics. This play captures the absurdity raised to farce proportions. There is some glorious silliness

Don't see it if you dislike illogical plot jumps that exist only to shakeup the onstage situation.

See it if you like a very well written play about a town that ignores its past. Great acting and nice staging.The ending was disappointing.

Don't see it if you don't like political plays. This is a dark comedy and by end of play it is not a comedy at all. Read more

See it if the idea of rewriting history to benefit white people at the expense of minorities interests you. The topic is heavy and sadly resonant.

Don't see it if you’re looking to escape the atrocities of life for a couple hours.

See it if u like both interesting & unexpected material; starts off as a comedy, which is very entertaining; acting is terrific & engaging; great set

Don't see it if u want a full play of laughter & entertainment; 2nd half turns very dark, disturbing & quite telling of the mind set of parts of America. Read more

See it if You like Letts writing. You will probably like this but won’t love it. Definitely not his best work.

Don't see it if You need a lot of action. The entire play takes place in a room where a city Council meeting is being held. Read more

"Ultimately, I came to feel that if it is the theater’s main business to mirror who we are — to act, like the minutes of a meeting, as an absolute record of what we say and how we behave — then “The Minutes” does what a play aimed mostly at white people must. It shows us how we are starting to understand, but still mostly failing to accept, that our privileges are tied to a history of denying them to others. "
Read more

"Letts has important issues on his mind, so I’m sorry I couldn’t follow him as he goes more fully into them. As he did in 'August: Osage County,' he wants to deal with the state’s foundational sin — the wholesale slaughter of Native Americans. In that play, the house (synecdoche for the country) has a literal Indian in the attic, and the housekeeper character Johnna only reminds and presides. But in 'The Minutes,' Letts isn’t content simply to point at history: He wants to impart its horror. This tonal shift requires a huge stylistic swing, and 'The Minutes' — so fine and deft and wicked for its first 60 minutes — can’t take it."
Read more

"'The Minutes' is both a political comedy and a wicked, methodically plotted horror show, not unlike American democracy and its original sins. The play’s razor-sharp edge is all the more cutting for being polished with easy wit, like tickling a captive before releasing the guillotine."
Read more

"It raises abiding questions both topical and troubling. What to do when accepted history is called into question, and cherished myths about the past are shown to be, well, precisely that—more wishful fiction than complex and potentially disturbing fact? And who bears the wounds when uncomfortable truths are swept under the carpet, and who reaps the spoils?"
Read more

"It’s also fair to see, without giving away a truly disturbing ending, that 'The Minutes' lifts itself from a satire of mundane corruption and small-town secrecy to something like an indictment of the very notion of America’s self-perception. The lightning flashes and booms of thunder that occur throughout the play – the lighting design is by Brian MacDevitt, sound design and original music by André Pluess – serve to illuminate and disguise, as needed, lending 'The Minutes' an unsettling, eerie and ominous mood from the get-go."
Read more

"I suspect that Letts's heart is in the right place, and that he is honestly interested in telling an important truth from a Broadway stage: This is a country built on top of conquered lands formerly occupied by the victims of bloodiest and most sustained genocide in recorded history. Nothing can ever undo that, and replacing the Pledge of Allegiance with a land acknowledgement is a poor form of reparations."
Read more

Even given its considerable sting, The Minutes is, I think, a minor Letts work, lacking the epic family dysfunctions of August: Osage County or the richly developed characters of Linda Vista. But there's little doubt that when it comes to presenting a clarifying vision of our confused and fractious present, he has few, if any, peers. Here, he offers a warning to keep you up at night: The myths by which we live are a powerful source of meaning; they also kill.
Read more

"A literal and metaphoric storm rocks an otherwise seemingly unremarkable city council meeting in the Steppenwolf Theatre Company's production of Tracy Letts's 'The Minutes' ... in an amalgam of tone and style that roils from gentle satire to sobering reality to a truly WTF ending that belongs to another genre altogether."
Read more