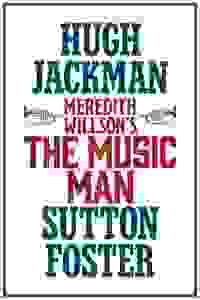 A revival of the 1957 Meredith Wilson classic, this production stars Hugh Jackman (Harold Hill) and Sutton Foster (Marian Paroo) under the direction of Jerry Zaks. Considered one of America’s greatest musicals, 'The Music Man' centers on a con man named Harold Hill. Harold has arrived in Rock Island, IL preparing to peddle the same musical instrument scam he’s been perpetuating all over the Midwest. However, things become complicated when he falls a little too hard for the local librarian, Marian. Will Harold be found out?

This five-time Tony Award winner is considered one of the 'great glories of American popular culture' by The Smithsonian Institution and is appropriate for the whole family.

This production received six Tony nominations, including Best Revival of a Musical. In addition to Jackman and Foster, who both received Tony nominations, Jayne Houdyshell ('The Humans') was also nominated for Best Performance by an Actress in a Featured Role in a Musical.

See it if you like the leads. Performances are really great! So is Choreography/dancing. Classic revival with no great creativity other than dancing.

Don't see it if Overall the show is dated. Nome good songs but also some boring ones. Story is stale. Entertaining but forgettable. Read more

See it if You want to see a solid & classic revival of The Music Man. Really great choreography & dancing. Sutton & Hugh are wonderful.

Don't see it if You are hoping for a reimaging or update on the material. This is a paint-by-numbers revival- nothing new. Read more

See it if You’re a Hugh Jackman fan. He shines. Most of the all star cast glisten in this very traditional looking old fashioned show. Perfectly done.

Don't see it if You’re looking for something big and splashy. There are some big numbers but the overall look of the show is sort of children’s book art. Read more

See it if Really great singing and dancing. Great choreography and sets.

Don't see it if If you don't want a big production.

See it if You are there for Hugh and Sutton. otherwise the show is just meh... sort of missable actually. Those leads are great as expected.

Don't see it if You have high expectations. You will be disappointed.

Don't see it if you expect warmth between characters or any sense of complications, want thrilling direction, no innovative choreography, not exciting

See it if you like an old fashioned musicial with songs you can remember, great lyrics, wonderful dance numbers and lots of humor.

Don't see it if you dislike Hugh Jackman or Sutton Foster or you like only modern musicals with a message that hits you over the head. Read more

See it if Classic with a great large cast with singing and dancing.

Don't see it if Dislike musicals, and want something heavy. This is a light happy story. Read more

"There comes a moment in the latest Broadway production of Meredith Willson’s “The Music Man” when high spirits, terrific dancing and big stars align in an extended marvel of showbiz salesmanship. Unfortunately, that moment is the curtain call. Until then, the musical, which opened on Thursday night at the Winter Garden Theater, only intermittently offers the joys we expect from a classic revival starring Hugh Jackman and Sutton Foster — especially one so obviously patterned on the success of another classic revival, “Hello, Dolly!,” a few seasons back."
Read more

"Yet while this Music Man is a solid and professional piece of work, and includes many incidental pleasures, the hoped-for enchantment never arrives. The production has reassembled much of the top-shelf creative team behind the thrilling 2017 Bette Midler revival of Hello, Dolly!, including director Jerry Zaks, choreographer Warren Carlyle and designer Santo Loquasto. And as in Dolly, it has surrounded its star with well-proved talents: Broadway darling Sutton Foster as his local foil, the wary librarian Marian Paroo; Marie Mullen as her excitable Irish mother; Jefferson Mays and Jayne Houdyshell as River City’s malaprop-prone mayor and his fussy wife; a loosey-goosey Shuler Hensley as Hill’s old friend and accomplice. The vehicle is polished; what it lacks is drive. "
Read more

Meredith Willson’s classic musical proudly revels in its old-fashionedness. [It] features a bounty of riches in the cast, with many of the supporting players seeming almost too qualified for their roles.
Read more

"Willson’s gem of a musical gets a fresh shine from director Jerry Zaks’ great-big-Broadway-show treatment. The cast is huge and hugely talented, the sets and costumes are an eyeful, and the stage effects are cleverly inventive...Warren Carlyle, a choreographer who revels in period dance, knows what to do with this enormous cast. More gratifying still, he’s respectful of Willson’s old-fashioned values."
Read more

"So, rise or fall? This Music Man does both. The rousing ensemble numbers have their charms, like the unfailing show opener “Rock Island,” with its chug-chug-chugging cadence lurching to and fro with locomotive rhythms (Loquasto’s gorgeous train interior of dark wood and deep green velvets is an early visual high point). Is there another Golden Age (or close enough) musical that so economically and irresistibly sets up its entire premise in one fell swoop?"
Read more

"This Professor Hill seems less a traveling salesman than a song-and-dance man on a second-class national tour. So ya got trouble in River City, and the miscasting of Jackman is hardly the only problem. Director Jerry Zaks has inexplicably opted for a cartoon version of the musical, with set and costume designer Santo Loquasto joining him as an over-the-top accomplice...Foster’s Marian has arrived, it seems, from a better production."
Read more

"As Harold Hill in a glorious and exuberant new revival of 'The Music Man,' Jackman is like a coiled spring, effortlessly leaping onto desks, two-stepping with kids, tossing books into the air and pounding out a rhythm on his thighs...If there ever was a stage match for Jackman, Foster is it...Director Jerry Zaks is a master at the romantic, comedic romp and moves things along with a seemingly effortless crispness aided by Santo Loquasto’s lush sets."
Read more

"4/5 stars...Are there soothing and satisfying pleasures in familiarity, high voltage, and expert execution? By golly, yes. Will this 'Music Man’s' sweet nothings reveal anything previously unknown about the nature of life, love, or the pursuit of happiness right here in 2022? Egads! No...Given that 'The Music Man' is a grift, the stakes never get off the ground. It’s another way the production’s lavish attention to surface belies a blithe and curious hollowness."
Read more

Can “The Music Man” Speak to a Modern Audience?
Read more