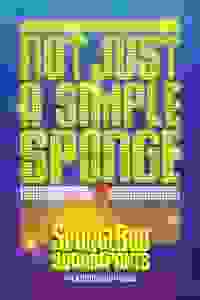 Nickelodeon's beloved cartoon icon comes to life on Broadway in this new musical featuring new songs from some of rock and pop's greatest luminaries.

Stakes are higher than ever before as SpongeBob and all of Bikini Bottom face the total annihilation of their undersea world. Chaos erupts. Lives hang in the balance. And just when all hope seems lost, a most unexpected hero rises up and takes center stage. Get ready to dive to all-new depths of theatrical innovation at 'SpongeBob SquarePants,' where the power of optimism really can save the world! The one-of-a-kind musical event includes original songs by Yolanda Adams, Steven Tyler and Joe Perry of Aerosmith, Sara Bareilles, Jonathan Coulton, Alexander Ebert of Edward Sharpe & The Magnetic Zeros, The Flaming Lips, John Legend, Lady Antebellum, Cyndi Lauper, Panic! At the Disco, Plain White T’s, They Might Be Giants, and T.I., as well as songs by David Bowie.

See it if you're looking for fun-for-the-whole-family. SSP is aimed at kids. Its cleverness will hold adults, but it is grating. Song quality varies!

See it if a fun show , good story behind it. Very good directing and staging. Not just for kids but for everyone of all ages.

Don't see it if it can be silly, not for the serious theater goer. If you are not into shows like school of rock, or any show that has kids themes too it.

See it if Happy cartoonish fun. Pleasing song and dance. Charismatic actors. Immersive set. Helps to go with a kid who knows the references.

Don't see it if You are looking for something more serious, or have no exposure to the TV show.

See it if you like noisy colorful performances with screaming, crying children wandering the aisles.

Don't see it if you expect characters looking like the cartoon, you require plot complexity, you don't expect cheap off-off B'way techniques on B'way.

See it if you're a fan of SpongeBob, family shows ok for kids, colorful costumes, zany sets, music by many popular composers, sight gags, clever dance

Don't see it if don't like SpongeBob or shows based on kiddie shows, farcical jokes & overwrought characters, scores created by many writers,

See it if Knowing exactly who it is & what it wants to say, SpongeBob is quite charming Fabulous! set & engaging ensemble go a long way to win us over

See it if it help to know Sponge Bob a little. Have a break from life and its funny. you like musical.

Don't see it if hate musical, bright colorful, and if you hate Sponge Bob. Read more

"Tina Landau’s exhaustingly imaginative production...You will probably adore this musical if: a) 'SpongeBob' was a formative influence of your childhood, b) you are a stoner who tokes up to watch reruns of the show on YouTube; or c) if you are (like my date for this show) a parent of 'SpongeBob'-bingeing progeny. If you are none of the above, you will find your patience sorely tested...Tune out until the next amazing set piece, and then gape at the ingenious reconfigurations of objects."
Read more

"A joy. Like its irrepressible yellow hero, played by the peppy and limber-limbed Ethan Slater, the show is unabashedly committed to imagination and dorky enthusiasm...What send the show soaring are David Zinn’s sensational costumes and set...In the end, 'SpongeBob' succeeds because Landau and Zinn make even the most complicated musical staging look and feel like child’s play. It wants you to have fun. Soak it in."
Read more

"It’s a truly gloomy soul who’ll be able to leave without mirroring the dopey grin with which the show’s absorbent yellow hero responds to his buddy’s existential angst...Under the joyfully maximalist hand of Tina Landau, Bikini Bottom gets the more-is-more-is-more-is-more treatment — with a DIY twist that’s both endlessly charming and integral to the production’s spirit...Is it too much? Nah, no such thing...I left realizing that I had smiled for literally every minute of it."
Read more

"In heavy times, we can all use a little nonsense. (The good kind)...Here’s where the real twist comes: the show is very good. This is largely thanks to Tina Landau, its conceiver and director, who fills the stage with visual wit, from giant Rube Goldberg machines that spit out bouncy boulders to Zinn’s relentlessly clever costumes and sets...An all-star roster of artists supplied original songs but the standout is 'I’m Not a Loser,' by They Might Be Giants."
Read more

"There's a certain whiplash effect, to be sure, in jumping from Bowie/Eno gloom rock to bubblegum pop to country to gospel to more conventional show tunes. But there's also a generosity of spirit here that, together with the playful visual imagination and the extremely likeable, racially diverse cast, proves hard to resist...Musical-theater snobs should probably give 'SpongeBob' a wide berth. But audiences willing to go with its demented escapism should find plenty of fun."
Read more

"A head-spinningly packed Act I spends far too long setting up these various threads...Act II is much smoother, and features some of the show’s highlights, like Squidward’s gorgeous tap number...It’s something of a challenge to stay fully invested and interested in this world for two hours and 30 minutes. But 'SpongeBob' certainly deserves points for creativity...Overall, it’s an entertaining, if overstuffed and a bit too experimental, homage to the long-running cartoon."
Read more

"Kyle Jarrow’s book retains the two key elements of the Nicktoon: the cheerful sea sponge’s unquenchable optimism and his selflessly heroic efforts to rescue his friends ...Landau’s hallucinogenic stagecraft transcends the show’s television origins by speaking a visual language that’s three-dimensional and boldly theatrical...It’s not as much of a gimmick as it seems, but without a signature sound, there’s no signature style. What there is, though, is plenty of giddy, goofy fun for all."
Read more

“Ms. Landau and her superb cast never feigned enthusiasm and never just preached to the converted. They believed. And as a technical achievement, the show is extraordinary...Pure silliness readily mixes with knowing kitsch...The cartoon is transformed into a combination campy circus, rock concert and amusement park...In addressing those adolescent issues, the play is fervently sincere peddling pedantic homilies."
Read more