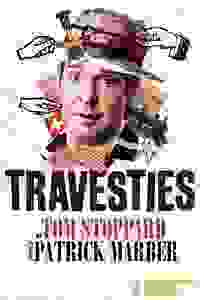 Tom Stoppard's dazzling comedy of art, love, and revolution features James Joyce, Tristan Tzara, and Lenin as remembered -- and misremembered -- by Henry Carr, a minor British diplomat in Zurich 1917. When Gwendolen and Cecily wander in from 'The Importance of Being Earnest,' Henry's mind wanders too. He knows he was Algernon in a production in Zurich. But who was the other one?

See it if you like a play that's sophisticated, funny, philosophical (re:art, politics, memory), rapid-fire, well-acted and well-staged. A wild ride!

Don't see it if you hate getting lost. Actors talk at warp speed. Read "Imptce... Earnest" first. Some peo left at intermission; I'd like to go a 2nd time.

See it if Just don't bother if you can avoid it. Numrich steals the show, the only saving grace of the show.

Don't see it if None of the Characters is treated in any interesting way. Nothing is new is learned about them. Read more

See it if You prefer philosophical discussions over story and character development.

Don't see it if You are looking to have a good time and be entertained. It was not a fun night at the theater.

See it if You can appreciate a show that you might not understand till you’ve seen the whole thing, and even then it might be hard to explain it.

Don't see it if You want an easy to understand, easy to follow and easy to relate to story. This has some superb acting and is incredibly confusing.

See it if If you like an upbeat play with great writing, acting directing as well as lighting.

Don't see it if The show can get deep and needs your full attention. If you don't like humor, parody or satire.

See it if you love circuses, puns & physical theater! Brilliant consideration on the purpose of art & its relation to sex among other things.

Don't see it if you need theater with a plot. There is some story but it is hard to discern in the wild staging.

See it if you're a fan of Stoppard or Hollander, like intelligent & absurd vocal farces, curious about DADA, Lenin & Joyce's time in Zurich

Don't see it if you're afraid of intellectual wordplay, verbal farces are not your thing, uncomfortable with British witticisms and puns or Stoppard Read more

See it if An intellectual delight A perfect tsunami of literature, history, theatricality, intellgence & punditry Cast is a dervish of perfection

"A work to remember, or misremember, for years to come...This latest incarnation is the clearest and...one of the liveliest. It should prove ridiculously entertaining for anyone with even a passing knowledge of its central characters...What makes 'Travesties' so deeply engaging and hilarious and touching isn't its flashy erudition but its author's rapt fascination with the workings of the human mind and its enduring relationship with art...The cast couldn't be much better."
Read more

"Devilishly clever...Artfully reassembles in an olio of genres-farce, spy story, seminar, musical, history lesson, absurdist prank-with mixed-in of culture high and low...The facets of Stoppard's jewel-like play are overwhelmingly brilliant...In Marber's well-judged and high-spirited revival, the result is inviting rather than snobbishly exclusive, and the structural and verbal dazzle are offset with subtle suggestions of elegy...It's a pleasure to engage with a production that does 'Travesties' full justice."
Read more

"A whirlwind of highbrow showmanship. But what keeps it from being pretentious is the sincere explosive joy with which it’s constructed...Stoppard’s writing is generous in its virtuosity...Among the triumphs of Marber’s production is the stellar comedy of its eight-person ensemble who unanimously understand the combination of precision and animation called for by their material...A celebration, an exaltation, a spell, a dance, a feast, and a farce."
Read more

"You don't have to enroll for a graduate degree to enjoy Stoppard's simultaneously wacky and intellectual comedy..That's largely due to the accessible nature of Marber's rollickingly staged production...The plot is nothing more than a springboard for the playwright's unique brand of clever wordplay and cerebral observations...The dense verbiage is presented through a prism of exuberant physical comedy and absurdism...Much seriousness underlies the humor."
Read more

"A gushing waterfall of wordplay, a fine-tuned literary torrent...Marber keeps Stoppard's verbal ballet moving briskly, occasionally slowing the action down just enough to let the narrative breathe...May be too discursive to ever quite nail down exactly what it's all about, other than everything. Still, one line from early in the first act does seem especially apropos, even if it undersells the frenetic wonders within: 'It may be nonsense, but at least it's clever nonsense.'"
Read more

"The show's set advises us to please be quiet...But you can forget about that, because the sound of laughter can't be contained...This extravagant farce bristles with clever wordplay...Fun on its own etymological terms, this madcap comedy also tips its hat — a beat-up straw boater with a jaunty red hatband — to the spirit of revolution that galvanized Europe in 1917...Underneath the gem-like brilliance of its theatrical style, the play's dark subject matter emerges."
Read more

"This 'Travesties' is a total success: The staging is outrageously vital and the cast is as close to ideal as it’s possible to imagine...It is as darkly serious as it is crazily funny, and you don’t have to get all of the highbrow jokes to relish the fizzing éclat with which 'Travesties' reminds us that whenever artists and revolutionaries turn the world upside down, things—and people—have a way of getting broken...You’re never going to see a finer revival of 'Travesties,' so catch this one while you can."
Read more

"'Travesties,' a nonstop tourney of wit and erudition, has often been called a brainteaser, but brain tickler comes so much closer to the jubilant staging...This 'Travesties' belongs first and foremost to Hollander...Under Marber's careful direction, Hollander takes Stoppard's comically befuddled British consul into some unforeseen emotional terrain."
Read more