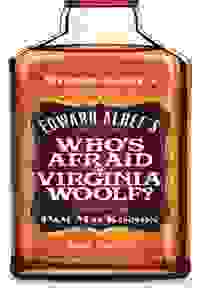 Who's Afraid of Virginia Woolf? (2012) NYC Reviews and Tickets

The 50th anniversary of this Edward Albee classic, brought the show back to Broadway starring Tracy Letts and Amy Morton.

George and Martha, a middle-aged history professor and his wife, return home after a faculty get-together. During the party, Martha’s father, the president of the college, had introduced the couple to a new teacher and his wife, and unbeknownst to George, Martha has invited them over for drinks—tonight. As George and Martha sling insults at each other, their wide-eyed guests, Nick and Honey, arrive. At first, the young couple is disconcerted by George and Martha’s bickering, but as the liquor flows, Nick and Honey find themselves drawn into their hosts' tumultuous, damaged world.

See it if you like Albee...and his classic tale of dysfunctional marriage. Well-acted (esply by Letts) and, therefore, uncomfortable. Hell on earth.

Don't see it if you like lighter fare. I admire Albee's play, but I don't enjoy it. This production was solid in prodn values, acting, and direction. Read more

See it if Edward Albee's masterpiece

Don't see it if don't like Albee's dyspeptic vision: it's all a game

See it if you like something smart, well performed, and well staged.

Don't see it if you're not into themes of drinking and drunkenness.

See it if The best production of this show I ever saw. Made me see the play in an entirely new way. Incredible performances.

Don't see it if This show was perfection. Flawless.

See it if You know the story or if you do not. 4 characters, 2 major roles, fast, smart, painful dialogue.

Don't see it if You shy away from conflict, anger, profane language.

See it if you enjoy excellent dialogue and intense performances.

See it if If this isn't Edward Albee's Best Play ever, it's certainly the most accessible. It also tends to bring the BEST out of the actors. GO-C-IT

Don't see it if If U don't like inter-generational plays where the older couple preys on the younger (both psychologically & literally). HI-drama fans ONLY!

See it if you want to see the freshest take on this Masterwork yet. The direction is stellar and the perfect cast is devastatingly brilliant.

Don't see it if intense bloodletting cerebral drama where nothing is off limits leaves you cold. This production not for you.