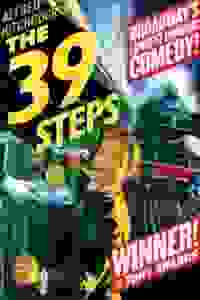 The Tony Award-winning comedic spoof of the classic 1935 film, in which four actors portray more than 150 characters in a fast paced 100 minutes.

The madcap story follows dashing hero Richard Hannay as he races to solve the mystery of 'The 39 Steps,' all the while trying to clear his name. The four actors change roles in the blink of an eye. This production, performed at the intimate Union Square Theatre, is a transfer of the Tony Award winning Broadway production.

See it if You like quick witted British humor.

See it if You like british comedies or Alfred Hitchcock movies.

Don't see it if You dislike slapstick comedy.

See it if you want easy-breezy entertainment. Nothing new (if you've seen the movie), but cleverly staged w/good actors. Fun and fast-paced.

Don't see it if you want meaningful theater. 39S is just for the sheer imaginative recreation (w 4 actors) of a full, action-packed movie. Read more

See it if you like shows that seem to magically make sets (and casts) out of next to nothing. A fun romp of a story.

Don't see it if you're looking for anything too serious. Think extended Carol Burnet sketch.

See it if You like Hitchcock with a side of farce.

Don't see it if You think this is going to be finely-crafted fun.

See it if You enjoy clever wordplay. You're a fan of Hitchcock movies. You enjoy shows w/pop references.You like slapstick. You enjoy fun staging.

Don't see it if You're not familiar with Hitchcock movies. You don't like slapstick or clowning. You want more traditional dialogue & staging.

See it if It was technically very good but I did not find the play compelling. Ultimately I found it cold and it didn't keep my interest.

Don't see it if It was popular but I don't think it was for everyone. Very stylized. Four actors play over 100 roles. Impressive but dizzying too.

See it if You are a fan of Hitchcock movies, love clever theater staging, want to have a great time.

Don't see it if You don't like farce or shows that have some silliness.

"It remains indomitably funny...This bare-bones production is as disciplined and as precise in its footwork as a 'Firebird' from the Bolshoi Ballet. '39 Steps' remains a gallant and giggly ode to make-do resourcefulness...The cast members are as crude and as refined as they need to be."
Read more

"It’s a supporting actor—Arnie Burton, reprising his 2008 Broadway role—who really carries this welcome revival...It’s the silly stage business that milks the laughs. Shedding and switching secondary roles faster than they can doff or trade their cloaks and caps, Burton and sidekick Billy Carter really put their backs into it."
Read more

"Author Patrick Barlow and director Maria Aitken have created a unique piece of screwball comedy to call their own...This loving sendup is part madcap romance, part mistaken-identity thriller, and pure absurdity...At times, it feels a bit like a backyard production from the neighborhood kids, but Hitchcock himself couldn’t have helped cracking a smile at the self-referential hijinks."
Read more

"One of the funniest plays Broadway had seen in years is now majorly head-scratching in just how unfunny this mounting is...It seems that the show was rushed to the stage without enough rehearsal...the pacing is so far off, the chemistry nonexistent, and the campiness too big for a house of this size."
Read more

"The cast is aces and the production is still full of funny delights, but while certainly an enjoyable diversion, '39 Steps' never builds to any real comic climax and, though never dull, generally remains on the same lightly amusing level. As foreshadowed in its opening scene, 'Something mindless and trivial. Something utterly pointless.'"
Read more

"This is in every other way 'The 39 Steps' as it's been for the last seven years — clever (sometimes to a fault), theatrical, not especially Hitchcock — just more in need of a fresh set of batteries and perhaps a good kick in the rump. If this isn't ever going to be everyone's cup of tea, it would still benefit from going heavier on the caffeine and a little (or a lot) lighter on the milk and sugar."
Read more

"A new production opened Monday with good cheer and manic energy...Director Maria Aitken makes miracles with the minimal scenery and few props, propelling her actors with astonishing fluidity...It’s good to have the looney clowns back."
Read more

"This fast, frothy exercise in legerdemain is throwaway theater at its finest. And that’s no backhanded compliment...The actors themselves seem to be having a helluva good time. As does the audience. 'The 39 Steps' stands out for its plying of minimal resources to maximal effect...This show flies lightly into an ether of escapism."
Read more