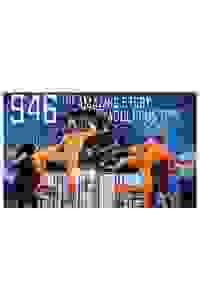 946: The Amazing Story of Adolphus Tips NYC Reviews and Tickets

Kneehigh uses live music, puppetry, dance, and visual high jinks in this adaptation of Michael Morpurgo's book about soldiers prepping for the battle of Normandy.

Directed by Emma Rice (artistic director of Shakespeare’s Globe), '946' is the true story of the American soldiers sent to rehearse the Normandy invasion from Britain's shores, many of them black. Seen through the eyes of a little girl and her beloved cat, '946' overturns everything we thought we knew about the D-Day landings. Based on the novel by Michael Morpurgo ('War Horse'). Appropriate for ages 10 and up, though be warned it is a war story.

Don't see it if saccharine stories annoy you. Act I had bumps, Act II was moving. Lots of inventively-used props and puppets. Very broad characters.

See it if You want to see beautiful storytelling! This is charming and childlike but not childish with very serious and heartbreaking content.

Don't see it if You're not willing to use your imagination or if you think that just because something is silly it can't be devestatingly heartfelt. Read more

See it if you enjoy creative staging with music, puppets and dance, appreciate stories of optimism amidst misery and like quirky appealing characters

Don't see it if you're turned off by WWII story told with humor, song & dance set during the London blitz, not a fan of cute puppets or active little girls

See it if you enjoy adventurous theatre. Also, theatre that is exciting, heartwarming, and very moving. Great ensemble cast!

Don't see it if you only like conventional plays. This play is very inventive, clever, sharp, and moving.

See it if story of British villagers impacted by a tragic WWII event, told with humor & great music; puppets (humans visible) that add to the story

See it if You want to see something absolutely unique brilliantly cross-cast. A bit slow developing, an old story spun brand new. ALIVE.

Don't see it if You dont like plays not easily defined. You didn't like the "magic" of War Horse. You dont want a "lucky button". Read more

See it if you can appreciate a novel, entertaining portrayal of the horrors of war and the peculiar viewpoint of seeing it through a child's eyes.

Don't see it if you think anything about the horrors of war should be serious.

See it if you want great, varied music, dancing, singing, puppets, humor, history and a moral, all performed by a diversely talented cast.

Don't see it if you don't enjoy history and/or musicals.

“Loads of puppets and Rice’s customary practice of putting instruments in the hands of her excellent actors lend a pleasing whimsy to ‘946’…Rice does not shy from the grimness of the military disaster...It is horribly moving. Yet in the show’s most demonstrative emotional moment, Rice and Morpurgo are heavy-handed just when they should be restrained…Those are the only times, though, that this fine production loses its poise. The rest of it is all about balance: of mirth and sorrow."
Read more

“I certainly bridled—and the trouble began early…We're in a sugar-coated World War Twee where everyone was wonderful to everybody…There's a long, proud history of telling the story of wartime through children's (comparatively) innocent eyes…But ‘Adolphus Tips’ never questions the rose-colored glasses; rather, Rice and Morpugo are jamming them onto our faces…I fell off the ride early, and for two hours, I suffered.”
Read more

"Kneehigh is known for its bold theatrical choices, and '946' doesn't shy away from them—even if it doesn't add up to the same impact of some of its previous productions...Has a tendency to feel reminiscent of Morpurgo's biggest hit to date, 'War Horse'...'946' feels slightly less original than it should...But we have to hand it to director Rice and her team, who've managed to create a version of Brechtian alienation that children will understand, even if it doesn't pan out all the way.”
Read more

"The play becomes genuinely moving near the end…But for a long stretch of its running time, ‘946: The Amazing Story of Adolphus Tips’ skates very lightly over its most emotionally potent material, entertaining the audience in a way that doesn't always feel fully honest…'Tips' certainly knows how to make its audience happy...Still, there's a darker, more moving story inside, still waiting to get out. You can bring the entire family to this production -- and, oddly, that may be its weakest point."
Read more

"It’s an enchanting show about a tragic event – if such a paradox is possible...An entertaining and deeply moving theatrical experience. Her stagecraft is nothing short of magical...Rice directs a marvelous, multi-talented 12-member ensemble who dance, sing, play multiple roles, and manipulate scores of puppets...Ultimately, credit goes to the vision of the amazing Emma Rice."
Read more

"A rich theatrical family-friendly evening of story, music, dance and puppets...This Kneehigh show continually captures our hearts...The cast is led by Katy Owen as Lily, played to perfection...'946: The Amazing Story of Adolphus Tips' demands an attention and a collective imagination from the viewer, making it a special theatrical treat. St Ann’s Warehouse is to be commended for giving Kneehigh a New York home!"
Read more

“What ‘946: The Amazing Story Of Adolphus Tips’ lacks — almost aggressively — is any sense of time and place…Artistic director Emma Rice has tossed in everything here, including a panto-style of performance entirely at odds with the bittersweet material…A show where most every choice is misguided…They drain away all the drama, nuance and texture of the book…I’d say Kneehigh has lost its way, but in fact it seems more like Kneehigh has been lost for a long time.”
Read more