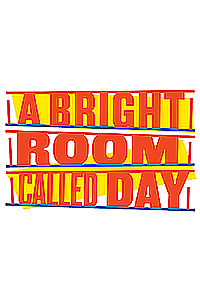 Agnes, an actress in Weimar Germany, and her cadre of passionate, progressive friends, are torn between protest, escape, and survival as the world they knew crumbles around them. Her story is interrupted by an American woman enraged by the cruelty of the Reagan administration, and a new character, grappling with the anxiety, distraction, hope, and hopelessness of an artist facing the once unthinkable rise of authoritarianism in modern America.

Funny, brilliant, and devastating, this new production of A BRIGHT ROOM CALLED DAY revisits an epic work that takes a piercing look at the vulnerability of American democracy, and demands to know: when the devil takes up residence in your country… will you act?

Don't see it if you want a neat, trim work. ABR is a mess, but an impressive, enlightening one. Rise of fascism. Urie is a standout! Great special effects.

See it if If you want a typical Kushner play raging against Reagan. If you like a communist themed play with little substance.

Don't see it if If you cant stand Tony Kushner's works, his twists on history even if it's not true. If you want a show with a meaningful plot.

"The Playwright Enters the Play In retooling his first produced work, Tony Kushner himself appears as a character in this lumbering portrait of endangered artists in Nazi Berlin."
Read more

4 Stars. "This will not be welcome to the kind of people who scream 'Godwin’s Law!' at any whiff of comparison to the Third Reich...But it is a privilege to spend three hours in the company of such an invigorating, morally serious intellect.
Read more

"The Wild Invention of 'Fefu and Her Friends,' and the (Latest!) Rewrite of 'A Bright Room Called Day'"
Read more

"This first major NYC revival of the 1985 debut from Pulitzer Prize-winning 'Angels in America' author Tony Kushner is a revised version featuring a stand-in for the playwright commenting on the action."
Read more

"Blaming the President: Tony Kushner’s 1985 history play prefigured ‘Angels in America,’ but even a new revival leaves a lot to be desired."
Read more

"Tony Kushner's A Bright Room Called Day Corrects Its Past Mistakes — and Hopes America Will Too: Kushner updates his Reagan-era critique of dangerous right-wing politics for a new production at the Public Theater."
Read more

"Dead on arrival when first seen at the Public in 1991, thanks to its irritatingly facile and misleading parallels between the Nazi regime and the Reagan Administration, it has been tinkered with by the author, with results that only add to its dramatic inertia."
Read more

"Tony Kushner is such a strong writer that he is able to instill in his characters a fluidity of speech that is poetic without being flowery, smart without being condescending, and witty without being focused on landing an obvious punchline."
Read more

4/5 Stars "The playwright's true focus, it would seem, is the fragility of democracy under a leader who doesn't recognize the fundamental rights shared by all people, regardless of race, religion, gender, sexual orientation or economic status."
Read more

4/5 Stars "To put it bluntly: Suddenly Kushner's parallel between the rise of the Weimar Republic and the evildoings of the Reagan administration seems pretty prescient, especially when you consider the fascist leanings of a current commander in chief."
Read more

"It was in 1991 that Tony Kushner's 1985 play saw the light of Day in New York at the Public Theater. A newly 'revisited' version is back at the Public under the direction of Oskar Eustis it remains an intentionally provocative, scary, almost absurdist, example of didactically-driven dramatic agitprop."
Read more

Score: 80% "That Tony Kushner was so prescient in his thinking is astonishing. He leads us through the rise of Hitler in a few short months and parallels it to our political cesspool created by the current administration. This is not a show for the faint of heart."
Read more

"Tony Kushner's dystopian vision has a firm grounding in the history of the rise of fascism in Germany in the early 1930s and in the methodical and somewhat meteoric rise of Adolf Hitler to Chancellor of the German Reich. This vision is embodied in 'A Bright Room Called Day.'"
Read more

"A cri de coeur and a call to arms…reworked for the Trump era…significant changes but it in no way feels fixed…sprawling, talky…self-indulgent. But it also offers a glimpse into Kushner's high-wire act of intellectual theatricality that makes his later plays so thrilling."
Read more