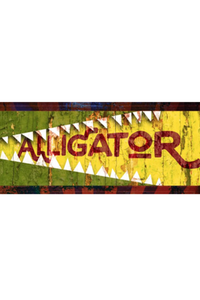 New Georges and The Sol Project present a new drama about twin siblings trying to survive a challenging backwoods existence.

Emerald and Ty are twin orphaned teenagers who live in the backwoods of the Florida Everglades and wrestle ‘gators in a roadside attraction. Careening through encounters in their small tourist town, they meet self-destructive young locals looking for a future and desperate young wanderers looking for a home; all carry secrets under ever-present layers of desire. Alternately realistic and surreal, and scored with gritty rock music, 'Alligator' is a play about learning to tame our darkest impulses.

See it if A hot mess of a playwriting debut Not necessarily a bad thing but mucho patience required. Fragmented story lines don't really come together

Don't see it if Jagged plotting & abrasive characters both interesting & off putting. Moreno as literal/symbolic alligator a highlight but underused

See it if Moreno plays another cocky, wise animal. Alcohol and sex-crazed teenagers in the Everglades. Juilliard-trained Bettis spins quite a yarn

Don't see it if Could use tightening. Granados and Martinez are a tragic couple. Swamp atmospherics in a messy stage pool. Lots of drinking & simulated sex

"'Alligator' feels like two plays...The stories never entirely meld. Sometimes such messiness can be theatrically exciting. Here, it feels haphazard and squelchy. Araoz’s direction doesn’t especially help. With its thin characterizations and inconsistent tone, the play becomes a pile-on of increasingly depraved events…Had Ms. Bettis and Ms. Araoz tempered the play’s sensational aspects, there would be more opportunity to savor what it does well...As is, 'Alligator' is all hiss and no snap."
Read more

"The text is thin. The metaphors are all embodied clichés…And characters get one characteristic each…So the play hasn't got texture—but there’s atmosphere by the bucketful. In this sort of overheated gothic, everything that can be extreme is extreme…It's all played in deadly earnest…Elena Araoz is a director with deep wells of imagination, and she and her team do impressive work. But she lets her performers work at a volume that would fit a much larger space."
Read more

"Any play that includes someone in charge of blood effects, a fight director, and a 'splash zone' is either going to be crazy funny or crazy disturbing. And while there are some surrealistically funny moments, 'Alligator' mostly falls into the latter category...It's a lot to take in, but under Araoz's direction, the enterprise could not be in better hands. The cast is uniformly strong and bravely committed to their often dangerously physical roles."
Read more

"A bold and fresh new play…The payoff...is rewarding, but Bettis may have bitten off more than she could chew in giving almost every character a secret to unearth. With so many interconnecting characters, it can be muddy to flesh out each character’s demon. This setback does not derail an otherwise mighty production directed by Araoz. And Bettis ambitiously and wondrously succeeds in taking her audience to a part of America seldom seen on the stage, screen, or page."
Read more

"During its first act, the play by Hilary Bettis wanders like its characters...Indeed during the first part, which runs slightly longer than it should, the audience is subjected to, rather than enlightened by, the tribulations of characters who not only fail to see a way out of their misery, but also seem to relish in it...The stunning second half...Here is where Bettis’ larger questions lie, and while the play proves she doesn’t always have the answers, audience members come out in a daze."
Read more

"The strife, confusion, and sadness in these characters gets played out with broadly drawn exaggeration. There are only a few moments of piercing emotional clarity…A tentativeness in this production leaves us wondering what characters and interactions we are supposed to experience as otherworldly…The staging only occasionally clues us in to where we are…There’s certainly something intriguing to Bettis’s dark, youth-centric world. But pointed emotional epiphanies are lacking."
Read more

“Themes of friendship, love, and trust are on the playwright's mind…, but they're as muddled as the characters, none of whom is credible. Nor is there much believability in Elena Araoz's staging, which is limited by a...cast unable to break through their roles' conventionality...For all the physical action, the work is more static than dynamic, and finding anyone to care for...is as difficult as sitting through this overlong...side trip into the fetid Florida swamps.”
Read more

"While the honest performances from a young cast and the feeling of Florida itself are terrific, I did find myself conflicted at times by the world of the play. The mix of fantasy and reality is not always clear enough to prevent confusion about some important plot points...The themes that Bettis tackles are delicate, worthy of exploration, and initially set up extremely well, and the metaphors of 'Alligator' are raw and bloody in the best sort of way."
Read more