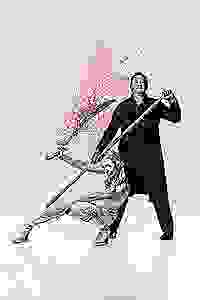 See it if you like offbeat cabaret acts - this one has important messages about today’s concerns from an Australia vantage point with some humor.

Don't see it if you want a polished act-the music & voices are okay but nothing special. Basic lighting with lots of fast passing video clips behind actors.

See it if you want a very odd but amusing evening and like accordion music.

Don't see it if you expect a fully staged play with a traditional plot. This is very Fringe, slightly experimental seemingly partially improvised.

See it if Aussie ukulele activist cabaret gal hoots and hollers her way to saving the world while everyone is watching. And why would you not?

Don't see it if Enthusiasm and a smile can paint over limited talent. "You're special. You're important. You're a hero. But I'm the one wearing Spandex."

Don't see it if You want a good bad show done well. You want a character that sustains interest from start to finish.You don't like audience participation.

Also She had good intent & message, though her narcissistic character wore thin quickly. She did far better in her more sincere vignettes. Not for me.... Read more Read less

See it if Original tunes about climate change, getting involved, politics, cellphone, selfies. Its quirky.

Don't see it if want a story show, or great music

Also The opening was very good. The show is series of songs. Some are funny and some like poems.... Read more Read less

See it if You want to see a cabaret about current politics, and you know something about Australia. Funny and quirky, it had its moments.

Don't see it if You want a well rounded show. It had a few to many ups and downs to be consistent. The multimedia was sometimes distracting.

Also The work needs pruning and polishing but is promising and potentially resonant to young audiences on college or other school campuses and at gatherings of climate change/immigration/human rights activists. The theme probably will be lost on “Trump’s base.”... Read more Read less

Don't see it if You want to see mediocre singing and satire, skip this one.

See it if you like cabaret-type shows;enjoy quirky shows; tepid political humor.

Don't see it if you prefer a coherent plot to a series of unconnected vignettes; dislike multimedia in the middle of a show; dislike audience participation

See it if you like Australian fringe works, you've seen Ms. Anastasia before and "get" her, you need an excuse to go downtown, you like wild costuming

Also We liked the theme of the show and whenever we could understand the lyrics they were clever. So it was frustrating that so much of it was over amplified. This is a tiny theater and amplification wasn't necessary. Ms. A. was nearly swallowing the mic for most of the show.... Read more Read less

See it if You like fringe festival type shows. You want to see a show sung about modern life and fighting the good fight

Don't see it if You want something polished. You aren’t interested in political songs and commentary.

See it if Your interested in the exposure of hypocrisy on both the left and right politically.

Don't see it if You believe that people are good selfless and sincere.

See it if you like basically a solo show with comic songs and are intrigued by discussion of slacktivism and comfortable caring in a today's world.

Don't see it if you mind a lack memorable songs, a lack of a clear resolution and take home, or mind overly contemporary and youth oriented themes.

Also This is basically a solo show with a supporting cast member playing a utility role. Its not without its charm, its just not enough. It has some interesting thoughts but a solo show kind of has to take the audience somewhere by the end, and this one really doesn't, she doesn't seem to have learned much by the end. Even if its a bit of cliché you kinda need that in a solo show. Additionally while she a good singer shes not great enough for that to carry the show and the tunes are forgettable. The play is fine while it last, but a very mixed bag.... Read more Read less

See it if you like a sincere look at important social issues served in a very zany, humorous, and sincere way with music, video, and glitter as well.

Don't see it if you don't like duo acts that sometimes get too satirical for your delicate sensibilities! Anya delivers with passion, pathos, and panache!

See it if you're Australian & get all the references; you have patience; you wish to support indie theatre; you want a selfie with Anya in her costume

Don't see it if you get bored by half-cooked material; a multi-media assault of blurbs from Facebook/ Twitter is what you go to the theatre to ESCAPE from

Also Onstage optics are the first puzzlement. Anya, a tall, slim blonde, is extravagantly costumed with a silver headpiece designed to resemble 5 hands grabbing 5 cellphones & a skintight cat-suit with an elaborate blouse.

However, her pudgy male sidekick looked like he walked in off the street, wearing a drab overcoat and a shirt he'd out-grown.

Yes, the "curse of the digital programs" sent me on a 30-min. search to discover his name! Even on Anya's Twitter feed promoting the show he was not credited.

A small budget is no excuse for him to look so shabby next to Anya's over-the-top stage costume.

There are clever lines in Anya's songs, which address the political scene (quite a lot from a Down Under perspective). Her stage persona is frantic about her social media presence & simultaneously mocks it.

See it if Enviro messages sung by a woman in a lurid sexual get-up sent mixed signals. The left brain didn't know what the right brain was doing.

Don't see it if You want to understand what you're watching. But you may treasure some of the bizarre memories.

See it if You like new work- a cabaret/ comedy with a satirical millennial point of view of technology and how to save the world.

Don't see it if You hate millennials, politics (I do but I loved this point of view). You think the world’s alright. You’re impatwvnew work.

TheatreLover311
New York City
Female
104 reviews
Get Alerts Alerts On Alerts Off
85
She has her funny bone on the pulse of modern society's slow walk to doomsday, Loved her very intelligent songs' lyrics. she should release them singly and in an album, Must see, She deserves and should get her own netflix special!, Funny for its self-deprecating analysis of the state of modern 1st world society!
December 1st, 2019

See it if You're young and tethered to your smart phone. Anya will set you straight on how you're more like a dog on the leash of social networks.

Don't see it if You couldn't care less of 1st world problems & live too inside your own head to care for global climate, political and sociological affairs.

Also Anya and her Russian very talented musician side-kick were refreshing, funny, smart, and delivered a great intimate show that deserves a much wider audience. Out-of-the-fringe and speaking truth to power gives this show an appearance of outré antics, but the lyrical songs spell it loud and clear: we're all victims of a diseased capitalism that is driving our doom and eventual destruction. Insane capitalism is driving climate change that will upend our present middle-class comfortably-numb lifestyle.

A beautiful face attached to a barbie-like beautiful body spoke truth to power in an Andy-Kaufman-like self-deprecating manner who's simultaneously in-and-out-of character and in on the joke. Loved all her songs full of 'admit to the stereotype but protest the outrageous corruption and manipulation' lyrics. Each of the melodically composed songs was a poem to the present crazy reality of global dysfunction in political affairs that are bringing the world to its knees. Go ahead & laugh...

See it if You are a fan of cabaret acts, dealing with environmental, on-line and political issues.

Don't see it if you expect a level of sophistication. Anya’s act is very “in-you face” with lots of material that is a rehash material heard elsewhere.

See it if you would enjoy unusual cabaret focusing on current politics.

Don't see it if do not like cabaret or are uninterested in an experimental approach to political entertainment.

See it if you want to see offbeat Australian cabaret that deals with millennial angst surrounding efforts to promote social change.

Don't see it if you aren't interested in an Australian take on global issues facing millennials; especially issues relating to climate change

Also The content of the cabaret was uneven.
Several of the numbers were clever and funny; others were trite. Overall, the show holds promise
... Read more Read less

See it if a "socially conscious" cabaret act; songs not bad but not particularly great either

Don't see it if If you prefer musicals that are more elaborate and that have a bigger cast. Also if don't like musicals with current political themes.

See it if enjoy a mainly one woman show with an environmental message and original (sometimes silly) songs, but entertaining...something different!

Don't see it if you don't want to be lectured to about environmental issues via original songs, quick videos

See it if You are from Australia because you will understand the humor and support a fellow Australian in her attempt to perform in New York.

Don't see it if You aren’t from Australia.

“Anya Anastasia: The Executioners” hasn't been reviewed by any Critics (yet!) 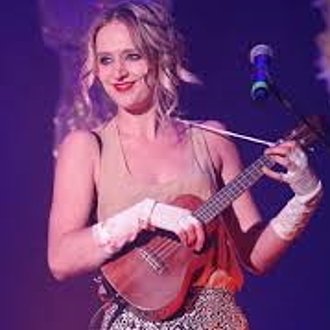 Anya Anastasia
Writer / Performer
Get Alerts Alerts On Alerts Off