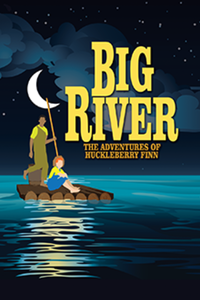 Encores! presents a concert version of the 1985 Tony Award-winning musical based on 'The Adventures of Huckleberry Finn.'

A musical retelling of Mark Twain’s classic novel about friendship, freedom, and the untamed Mississippi, 'Big River' was an underdog as scrappy and restless as Huckleberry Finn himself. The show was created in the age of British spectacles by a quintessentially American artist—the beloved country and western singer Roger Miller—and his Tony-winning score is a blend of bluegrass, gospel, and honky-tonk. More than 30 years later, 'Big River' remains an affecting journey through 1840s America in all its beauty and savagery.

See it if Nice to revisit a show from my past but thought it felt dated. Performances were weaker than I remember. Missable.

Don't see it if You need a fully staged show with sets and costume changes, etc...

Don't see it if DeBessonet's vision rather dark yet pointed taking some of the sugar off Miller's songs; music doesn't really gel with story. 2nd act drifts

76
Pleasant but not inspired musical version of twain's huck finn

Don't see it if Twain, arch-provocateur, would have thought this rendering of his feisty anti-slavery novel much too safe

See it if you like country music and a reminder of sadder days re; racial problems

Don't see it if you are expectinga song and dance etravaganza..... but alas we caught the last performance

See it if you're a fan of Huck Finn or stories about race relations.

Don't see it if you think heavy, unnecessary narration detracts from a story.

See it if You enjoy adaptations of classic novels. You want to see great performances & wonderful singing. You like country music.

Don't see it if You want to hear contemporary music: this is '80s country music. You want a classic, Broadway sound. You dislike literary adaptations.

See it if You are a fan of the show or have never seen it. The music is wonderful. Incredible singers.

84
Big river is a big winner

See it if Nicholas Barasch as Huck and Kyle Scatliffe as Jim as perfectly cast and give wonderful performances. I usually don't care for country music

Don't see it if you are offended by frequent use os the n-word (though it is authentic Twain). I liked Huck's drunken Trumpian father's "Guv'ment" song rant Read more

"If you are looking for a Huckleberry of irresistible sweetness and rambunctious naïveté, then Lear deBessonet’s buoyant Encores! production is the place to find him...Yet it can’t mask the feeling of anachronism that dogs this show...'Big River' feels like an awkward fit for this moment...It is hard to watch a story that’s framed as the tale of Huck and Jim without being bothered by how sidelined Jim is, and how very white and male anyone who has a substantial role is."
Read more

"You will not be able to watch 'Big River' without squirming...Other than Jim...the black characters are entirely undifferentiated and unattached to the plot...The authors treat Jim exactly as Huck and the others do: That is, they mostly ignore him...I’m not saying that a story about white people’s awakening to the immorality of slavery doesn’t deserve to be told. But in 2017 you can’t use a chorus line of slaves just to decorate that story with unmoored testifying and gospel thrills."
Read more

"An all-too-limited engagement justifies its existence with its winning exuberance, terrific performances, and the top-flight musicianship...Landesman has provided a streamlined concert adaptation of Hauptman’s book that keeps the episodic story line flowing as smoothly as the Mississippi River. But the show’s strength has always been the terrific score by the late Roger Miller...Director Lear deBessonet provides a lively staging...This is a 'Big River' which deserves to flow on much longer."
Read more

"The Encores! production of 'Big River' is, in a word, perfect. And, in a few other words, moving, powerful and exhilarating...This superb version...is staged by Lear deBessonet, who has done miraculous work at the Public Theatre. It’s spirited and lively and the cast couldn’t be better: up-and-comer Nicholas Barasch as the game but sometimes conflicted Huck; Kyle Scatliffe resonant and powerful as Jim; and a supporting cast of veterans that makes meals of every role."
Read more

"The relevance and appropriateness of 'Big River' and its source material are open to question in the current political and cultural environment...In my opinion, both works take on extended relevance today..."The Encores! production proves to be unusually polished, dramatically compelling and often fun and joyful...A score based on the sounds of bluegrass, Americana and gospel is no longer a rarity, but 'Big River' sounds as fresh and flavorful as ever here."
Read more

"It sounds better than ever...Scatliffe gives the standout performance of the evening: His delivery is vocally spectacular and he seems to sweat urgency from his pores...Lear deBessonet's production captures the matter-of-fact cruelty of the world according to Twain: Lines that make a modern audience blush are delivered without so much as a second thought...Everything comes together for Miller's distinctive country and bluegrass sound, which keeps our toes tapping throughout the evening."
Read more

"'Big River' turns out to be more pleasant than polished. Though Miller wrote a very attractive collection of songs, few of them are specific to the characters and plot...Despite the significantly smaller cast and modest production values, deBessonet and her terrific company smoothly navigate the ever-changing landscape of the musical's episodic journey."
Read more

"Emphasizing Miller's score only exacerbates the issues that already exist...It doesn't matter how good Rob Berman's orchestra sounds...if it all comes across as literature night at a condemned honky-tonk...This approach ends up transforming everyone outside the central foursome into extras rather than integral participants in the narrative...The problem with 'Big River' in general, and this version in particular, is that you don't really care about much."
Read more