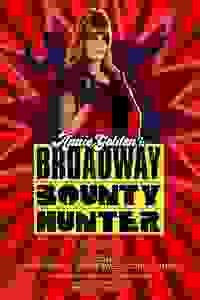 From BE MORE CHILL writer and Tony® nominee Joe Iconis comes an electric musical comedy with an irresistible soulful, new score: BROADWAY BOUNTY HUNTER. Down-on-her-luck actress Annie has just about had it with showbiz, when along comes a gig no one could have predicted: the opportunity to become a real-life, Kung Fu-fighting bounty hunter. Suddenly this woman of a certain age is going from bad auditions on the streets of New York to beating up bad guys in the jungles of South America – and discovering her true badass identity along the way.

Following a sold-out, critically acclaimed run at Barrington Stage Company, a re-imagined, brand-new production of BROADWAY BOUNTY HUNTER is ready to take over New York City with a killer cast of singing, dancing, karate-chopping characters and a powerhouse band. Get ready, ‘cause here she comes.

See it if you want to be entertained. Prodn works on sm stage (set projected). BBH grew on me, esply w its strg, energetic cast. Understudy at Sat mat

See it if If you like a spoof of a musical with a lot of camp. Great fun and good acting in a great theater space.

Don't see it if You can’t bear Broadway in-jokes and caricatures. You want a more meaningful experience. You need more comfortable seating.

See it if to witness the sublime Annie Golden kill it in a long-overdue leading role; u really enjoyed Be More Chill & basically seek more of the same

See it if you'd like to see small stage delivery by a great cast in all ways: choreography, props, projections, lighting, sound, music, camp, costumes

Don't see it if you cannot enjoy a fun ride with a ridiculous plot that contains a great twist. Seating not the most comfortable; performers in the aisles. Read more

See it if Fun is your thing! Totally unexpected, absurd and wild, a marvelous piece with great use of digital displays. Sound level is non-offensive.

Don't see it if you dislike musicals particularly rock based ones. The plot is ridiculous.

Don't see it if Fun, but flimsy book.Despite very talented cast, everybody was just Kung Fu fighting & that's frightening.She's picked only for her marriage Read more

See it if Fun with laughs and good singing, with a silly story line. Dancing and fast moving. Refreshing supporting cast.

Don't see it if It looks a lot like the 70's. If you want only serious shows.

"She Belts. She Brawls. She’s a ‘Broadway Bounty Hunter.’ Annie Golden stars in a musical B-movie pastiche that lands in the gap between tribute and spoof."
Read more

"Theater veteran and 'Orange Is the New Black' regular Annie Golden plays a crime-fighting version of herself in the new musical from composer Joe Iconis ('Be More Chill')."
Read more

"'Be More Chill' composer Joe Iconis custom-builds a daffy love letter to actress Annie Golden and to the business of Broadway."
Read more

"'Broadway Bounty Hunter' Is the Nuttiest Musical of the Summer. The composer of 'Be More Chill' pens a show for musical-theater obsessives."
Read more

"A combination of grindhouse-movie tropes, inside-Broadway gags, and a score that is pure hot buttered soul -- all in service of a female-empowerment theme -- 'Broadway Bounty Hunter' has a nutty originality even if it doesn't always know when to quit…everything [Golden] does is thoroughly delectable."
Read more

★★★★ "'Exploiting a Darling Character in Pursuit of Laughs.' It may be a fairly frivolous affair, but it sure is fun to see and nice to hear."
Read more

★★★★ "'Annie Golden Nails It.' The comedian taps into her badass side in Joe Iconis' 1970s -inspired musical."
Read more

"While 'Broadway Bounty Hunter' with its homage to the Blaxploitation and Martial Arts movies of the 1970's and 1980's will likely not attract the same audience as the sci-fi teen musical, 'Be More Chill,' it is an entertaining evening in the theater."
Read more

"The chance to see Annie Golden in her fiercely ridiculous (or ridiculously fierce) pursuit of justice is a bounty worth hunting all by itself."
Read more

"This playfully loving musical is really a meta-love song to the gloriously talented Annie Golden, surprising even the most adoring fan with her powerful vocals and her extremely engaging presence...Accolades and standing ovations is exactly what she deserves for her 'Broadway Bounty Hunter.'"
Read more

"Well-meaning, cleverly designed and terrifically sung, 'Broadway Bounty Hunter' has a game and talented cast, a funky pastiche R&B score composed by Joe Iconis, Tony-nominated songwriter of Be More Chill, and a plot that couldn't be sillier….not quite the vehicle for Annie Golden that it could be."
Read more